Arriving off the ferry and stepping foot onto Koh Phagnan you are greeted with the sight of hungover faces, luminous Full Moon Party t shirts and tuk tuks with speakers blaring out music. Known for its monthly full moon party with legendary tales of drunken adventures, my friends and I arrived four days prior to the August full moon party, which I recommend doing as accommodation in Koh Phagnan, let alone Haadrin, gets booked up quickly. We decided to stay in the centre of the night life, Haadrin. Booking only a month before the big night meant that we had to stay in “Yan Dorms” which seemed to be acceptable. When we found the hostel, we were told we would be staying in Yan’s massage parlour where he takes his clients. Although lying on single mattresses in a line and having glass doors which people could look into from the outside, this meant we had the only room with working air conditioning, which I am grateful for. Yan was a friendly man, although at times a little too friendly as he liked to repeat to us on a day to day basis, that he wanted to have sex with a backpacker girl and fast. I think his feelings sums up many of the tourists that go to Koh Phagnan, the need to out do other backpackers, tourists or anyone in drinking, drugs and sex.

It is strange to go to place where the whole island depends on one night a month to build their economy. You can feel the buzz of anticipation and excitement as each day gets closer and closer to the day of full moon. Haadrin itself is as far from Thailand as possible. Slogan t-shirts, English restaurants, numerous bars, and large groups of young Brits make this island the new Magaluf.

The entire island is based on excess. All that visit find themselves hard to restrain themselves as everything is available and easy to access to them. This means that the beach becomes dirty, messy and unpleasant. I felt like I was in a zoo, constantly watched and judged by other backpackers with thinner tummies and more make up on (its Thailand not Ibiza?!) To escape from this beach we would frequently pay taxi boats to take us further up the coast to different, more secluded beaches, which still had white sand and pleasant seas. Many tourists stay on the west side of Koh Phagnan, only visiting Haadrin on the night of the Full Moon Party, which I would recommend.

The beach is packed in the day and filled with football competitions and volleyball, whilst at night it is a different story. Easy access to drugs and excessive drink make all that visit, uncontrollable. And this is only the lead up to full moon. We spent our first night at Coral Bungalows, famous for their pool parties. Although many stay at Coral Bungalows, it is far from the central of Haadrin and the party itself wasn’t worth it. 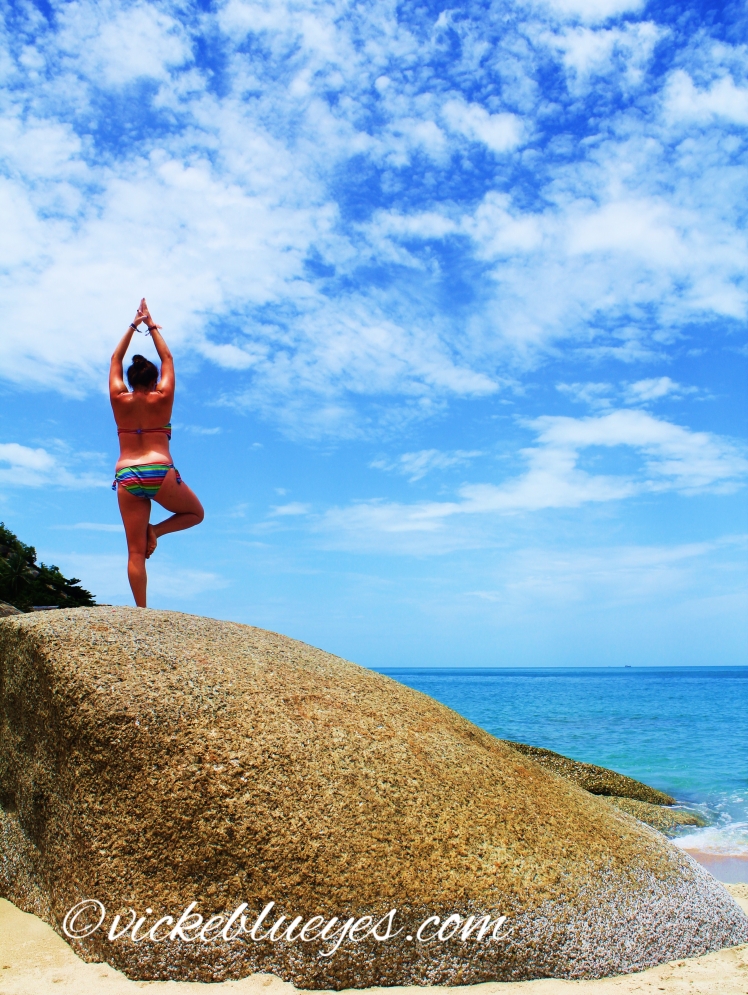 Each day and night you could see the gradual increase of people until finally the day of Full Moon was here. Stocking up on whiskey and UV paint we joined in with the excitement. We saw fast paced fire dancers, large groups of tourists in tours following large flags and taking photos rapidly of their surroundings around them, whilst tourists fornicated in the sea, next to other drunk tourists who used it as a urinal. This was only at 10pm. The night got more and more hectic, areas of the beach played different music with the help of different DJs set up in various styles of stages and the as the sheer amount of people increased, the noise level of the music did as well. As the hours went on, people began to drop like flies on comfy patches of sand, unable to keep their eyes open from the ever increasing powerful sleep. Whilst others consumed more and more liquid around them as if we were in the Sahara, whilst the sun began to slowly come up, turning the seedy airs of night, bright and open to the new day.

Although I enjoyed the experience of the famous full moon party, it is not something that I will ever go to again. And although I recommend going so you can believe the experience, I warn you to be careful as whilst I was there, one of my friends got an infection from the sea, one got spiked and one got robbed. Haadrin has turned into a place where young people come and go wild, the English version of Cancun, which unfortunately ruins the landscape, the environment and the atmosphere. If you are looking for a cultural experience, avoid like the plague.