Arriving in Naples from Rome is quite a shocking contrast. It’s like buying a Vogue and then finding a Heat left on the train and reading that. Rome is a beautiful city whilst Naples is a real city. Winding down side streets filled with graffiti, wet washing dangling and blowing in the wind, noisy neighbours chattering and gesturing as if fanatics and leery men seeming straight out from the Gangster film: The Godfather, you really get an essence of real life Italy.

Naples is another city in Italy where it is delightful to wander around the city with no real agenda or direction. Although some areas of Naples are not the most safe areas, stick to the most populated and main areas of the city. Any inquisitive Italian will be happy to point you in the right direction to where you should be, whilst smiling eagerly at your petty Italian language attempts. Wander down to the port whilst drinking beer and eating fried mozzarella, passing teenagers sharing passionate embraces, beautiful royal palaces and castles, the UNESCO World heritage site of the Historic Centre, and ancient aqueducts. The city comes alive at night, when all members of the family have worked all day and have been fed or are in the process of being fed, the city and its people laugh much louder and the lights shine much brighter. Make sure, whilst you are in Naples, to restrict your diet to pizza three times a day. Naples is notorious for their unique thick dough, so unlike the rest of Italy’s Pizza’s, which makes the pizzas here reign supreme and forever a fantasy for food lovers.

There is much to see in the city of Naples, but there is even more to see around it. If a geography buff, or just merely interested in climbing one of the most dangerous volcanoes in the world: Mount Vesuvius, head to the train station. You can get a train to Ercolano, although trains run as they please so keep this in mind when organising your day, and get off at the first stop of Ercoloano. Outside the train station you can hop on the “Vesuvius Express”, which will take you up to the top of the Volcano for 10 Euros- don’t try walking it, it is far and you will die. Slight exaggeration but we did see a pair of tourists really struggling. You are then given an hour to walk around the large crater, look into the depths of ash and gravel and out to the beautiful view of Naples.

Another must see whilst in Naples, is the city of Herculaneum. A medieval town smothered and destroyed by a volcanic eruption in AD 79, it was buried under hot volcanic mud and all members of the town died from thermal shock. Although less famous then the ash covered city of Pompeii, Herculaneum is much more well preserved. Wandering around the empty shell of a town, more materials are intact such as wooden beams and stone baths. It is insightful to see the historical remains of the town, but does also add to the fear factor of the power of Vesuvius, and how this could happen once again, at any given moment. To get to Herculaneum you must get a train to Ercolano, the modern city in which it is based. If you are under 25 and European bring your passport with you as you get half price off! 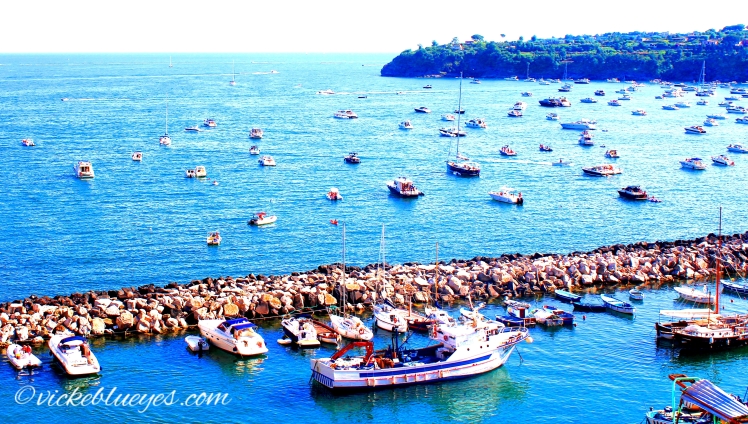 Or if venturing around skeleton towns and geographical points of interest is not for you, head to the array of islands off the coast of the Bay of Naples: glitzy Capri, popular Ischia and authentic Procida. We were limited on time and so only headed to Procida, recommended to us by out hostel owner. We were so happy we followed his advice. Catching a ferry from the busy port of Naples, we passed speedboats and sail boats heading to this Mediterranean slice of heaven. Procida is a small island and compared to its boisterous neighbours, it has far less tourists and buckets more charm. Wander around its narrow streets and churches, ambling past tiny shops and statues of Mary to head to the Abbey of San Michele Arcangelo, the central role in Procida’s religious and cultural history. Ignoring its call for mass seekers and its proud ringing of the bell, we looked out onto the beautiful horizon filled with rippling waters and bobbing boats.

Buy some home made ice cream and meander down past streets filled with beautiful ancient architecture to make it to the picturesque pastel painted houses that line the sea front. Smile at locals frolicking in the sea and head to Procida’s most popular beach to do as the locals do, and share a pizza on the volcanic sand beach. It is a beautiful day trip to one of the islands, or if you have more time, island hop from each one to another. A word of advice: when you arrive on whatever island you go to make sure you buy your return ferry ticket, they sell out quick! And an unexpected stay on an island might not be in your itinerary.

We stayed at Giovani’s Hostel, which has a fantastic warm and welcoming host who is passionate about his city of Naples, bombarding you with activities to do and urging you to stay longer to see all. He does get excited about things, so do not take his word as God as some sights are not as entertaining as he admits (aqueducts to be exact). The hostel is in a central location and is average with bunk beds, showers, a kitchen to cook your own food and a balcony. He cooks pasta every evening which is a lovely contribution and there is a curfew and ban on people being drunk out of respect for others, which is considerate.