After a few days in India (more like a day and a half) I can understand why some backpackers do not enjoy India. Like marmite, you either hate it or love it. India is a melting pot of people, of religion, colour, social classes and traditions. It is full of various dream and hopes, emotions and feelings and that dominating presence of reality. Wafts of spices and tantalising flavours are juxtaposed with overwhelming smells of men’s urine and cowpat. (Cows flood the streets due to their sacred presence and how their milk is symbolized as pure- making dodging cows a form of entertainment for traffic).

Arriving in Bangalore we waited for the first bus of the morning to take us to the city centre. Arriving in darkness and relying on our wits and intuition to tell us when to get off.  We past rundown parts of the city swamped with Bollywood posters and starved stray dogs on every other corner. We got off at Majestic, the main bus station where we planned to leave a few hours later, so we went in search for a hotel nearby. Being exhausted and tired from our flight we weren’t picky with our choices, thinking somewhere that is preferably open would be good. We woke up the receptionist to let us in to a room, happy we finally found an abode for the night. Opening the door to find a scuttle of a cockroach, a squat for a toilet and a bucket for a shower, my hopes were dashed. I found myself lying awake as I was slowly nibbled by various bugs and hearing the loud noises within the hotel for the next 5 hours. As I tossed and turned wishing for the peaceful escape of sleep, the sweet release of rest, I pondered- is this what India will be like? Because if so, I’m more materialistic than I thought choosing a western toilet and running showers (no matter how cold they are) single handily every time.

Rising from my non existent slumber, we went out and faced Bangalore. A technological city where mad dashes across the road were a norm. There was little there and I passed and watched in pity the street cleaners who peeled off posters and a cute 4 year old girl who gave me a cheeky smile, with her cute bob of a hair cut, her cute arms adorned with bangles and her cute sari a kaleidoscope of colours.

We soon escaped the hustle and bustle of the city swapping views of cows chewing plastic for palm trees as we surged closer to our next destination of Mysore.

Here are some facts I learnt about India:

*2 Types of Bollywood moves (which is a billion dollar market- one is serous and has thematic issues relevant to modern society, others are full of twists and turns in romantic plots and ridiculous scenes- whilst writing this in my travel journal a bollywood movie was being played on the bus that showed a scene of a man stamping on his phone and then becoming trapped in his phone, facing the flappy bird app and other various strange happenings with apps).
*Bollywood movies as well as the people can speak english which makes me feel inadequate as I cant speak their language, yet most people can speak 3 or 4!!
*The country has the second biggest population in the world, right after China and by 2020 it will overtake China.
*25 percent of the population live below the poverty line which is as little as 2 dollars a day.
*46 per cent of kids are malnourished and are in worse conditions than in Africa.
*India has the quickest success rate for millionaires
*Towns (Cities) of 1 million people are known as towns because cities are only places like: Mumbai, Dehli, Calcutta, Bangalore and Hyderabad.
*Everyone is ranked by castes (classes) and there is a class called the untouchables which no one interacts with and has no respect given to them.
*Most popular religion is Hindu, followed by: Islam, Christianity, Buddhism then Sikh (as well as many others)
*A head wobble can mean yes, no, maybe or I do’t know. Much to our own confusion.

In Mysore there are a number of sights to see that are immersed within this small city, hidden around certain corners. Make sure you check out the Derejava market– which is known to be the third best market in India. It forms a whirlwind of colour and aromatic spices which wafts up your nose. Vegetables are next to stalls of spices, herbs, fruits, paint, snacks, oils and bangles. I asked stallholders if I could take their pictures much to their own immense satisfaction and once shown their pictures they exclaimed “super!” Around this area, there are a number of vegetarian restaurants close by (there is a big emphasis on vegetarian over India because of the hindu religion). We picked one and a waiter came up and stated “What do you want?” to which I replied, “What do you have?” We were promptly given dosas. Dosas are a flat like pancake with a fluffy yet crunchy texture, which is thin and is prominently used to serve breakfast. For our late lunch we had this with potatoes inside and a spicy sauce and a cucumber mint sauce that tasted like dust to me. I ate mine like a fajita, so the waiter laughed at us and wiggled his head to his own amusement. Now, if we are given cutlery- we use it, otherwise we are slowly catching on with using one hand to mop up sauces and mix all the various textures and flavours together.

The main sight in Mysore is of course, Mysore Palace. In Mysore Palace you will be astounded by the grand rooms where the king would receive various guests. The ornate ceilings and pictures of the British king and queen baffled us and made us ask how far did the British control the Raj empire? What outcomes and atrocities happen? Outside we were swamped by young Indians donning sunglasses and bandanna’s resembling a hip “crew” who came over asking for pictures with British girls, specifically “singles” with the blonde girl (I felt like a celebrity but was a bit worried where these pictures would go). 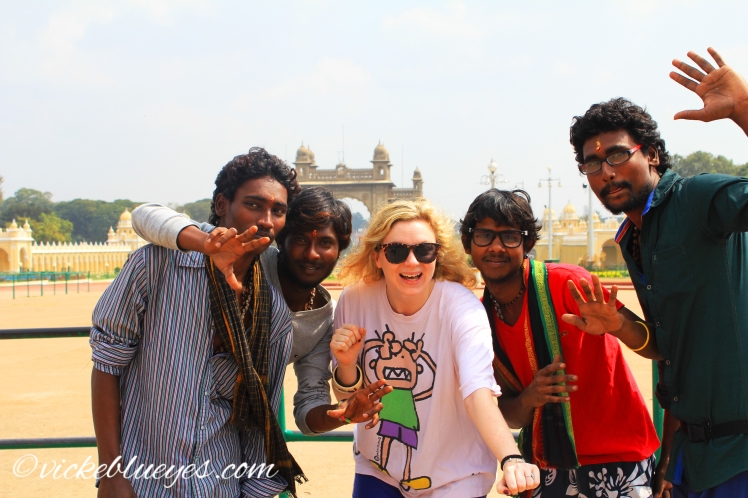 Get a tuk tuk up to Chundati hill (a strange choice as the hill is steep and the engines are weak) where you can see a popular temple and the whole of Mysore at your feet- where we could spot the palace and the patchwork effect of the colourful houses. Ignoring the becks and calls of tuk tuk drives descend steps down the mountain, where you will be surrounded by monkeys and couples muttering sweet nothings in each others ears away from the prying eyes of their families. Halfway down we stopped off at a priest who anointed us with red bindis and with a sly ring of his bell in front of a god carved out in rock, money was given to him (funny how that happens!)

Although seemingly a long journey, it is worth going down these steps to see the view as well as the various shades of orange, red and yellow from the powders of the pilgrims that ascend these steps. From here we went to the sand museum (India’s first which is beautiful and whoever can put that much time or dedication into sand is astonishing!)

A restaurant we tried which was recommended by the a lonely planet is called Tiger Trail based in a posh hotel. Arriving in sweaty clothes and our day rucksacks, we felt a little out of place, but unlike how we would be treated in London because of our attire, our skin colour allowed us entry with a flourish. It is sad to have this effect on places and people, as I am sure many people suffer this prejudice in a a disheartening way, being on the other side. We were given menus, cotton napkins and waiters were dressed in matching outfits. Sitting underneath lofty branches with twinkly lights we ate beside other Europeans with a meal which we could have easily eaten at home (and it cost more than our room across the road much to our shock!) The food is here is the quality and taste of what you would have at a Indian restaurant in the UK, although a lovely location, so if you would prefer a more authentic meal, go afield. 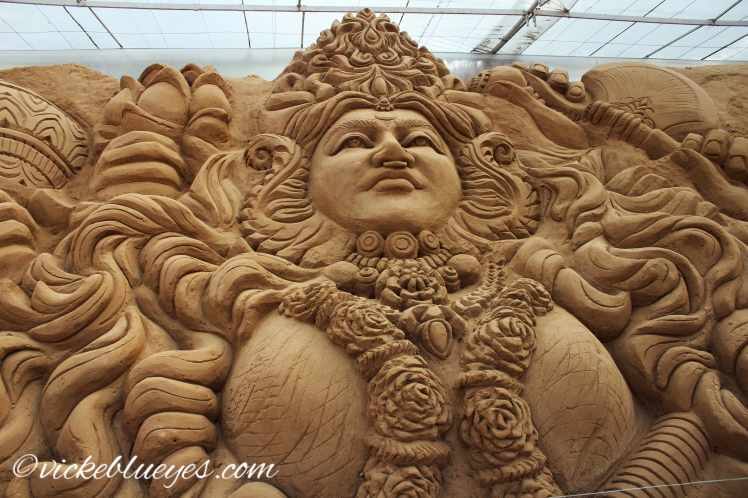 2 thoughts on “Bangalore to Mysore”