The start of our train journey we were surrounded by 8 men. Our past experiences with men asking questions about our personal life, meant that we answered curtly, however, we soon found out these men were just curious, interested in the life we lead. A finance student pointed out sights for us on the train and a proud father told us about his job as a supervisor at a factory, his church and showed us pictures of his family lovingly. Soon these guys left and were replaced by loud brash and aggressive men from another state who glared with menace at us and laughed a malicious laugh. After what seemed like an eternity, those men soon left and a man from the army joined us, promising he would look after us. Just before we managed to grab a few hours of sleep, we met two 14 year old girls on their way to a taekwondo competition who asked us to sing “My heart will go on” by Celine Dion. In return they sang a beautiful song in Hindi (after we embarrassed ourselves first by our awful singing in front of the entire train).The journey was intense and exhausting, and after, we vowed to travel in a AC carriage, although chilly and expensive, it would be a much safer option.

Goa is a vast area of India, even being its own state. It has a notorious reputation for being the most liberal state, where alcohol is legal and where most holiday makers flock to. Large resorts cover the area of Baga and palm trees line the coasts. We headed to the north of Goa, away from the peace and solitude of Palolem in South Goa, and the notorious party scene in Vagator, the centre of Goa.

Visiting Anjuna Beach you can spot Indian tourists posing on rock pools on one side of the beach, whilst the sandy shores are filled with dogs that pick fights with cows who roam freely, Russian couples that draw in the sand and take photos next to their work, and groups of Indian lads pretend to be from different corners of the world whilst talking to western women (they got the message pretty quick we were not interested either way). We were not swayed by this beach, (or the rocks it had in the sea), it was not beautiful like Varkala, nor private, nor quiet, and it lacked character. 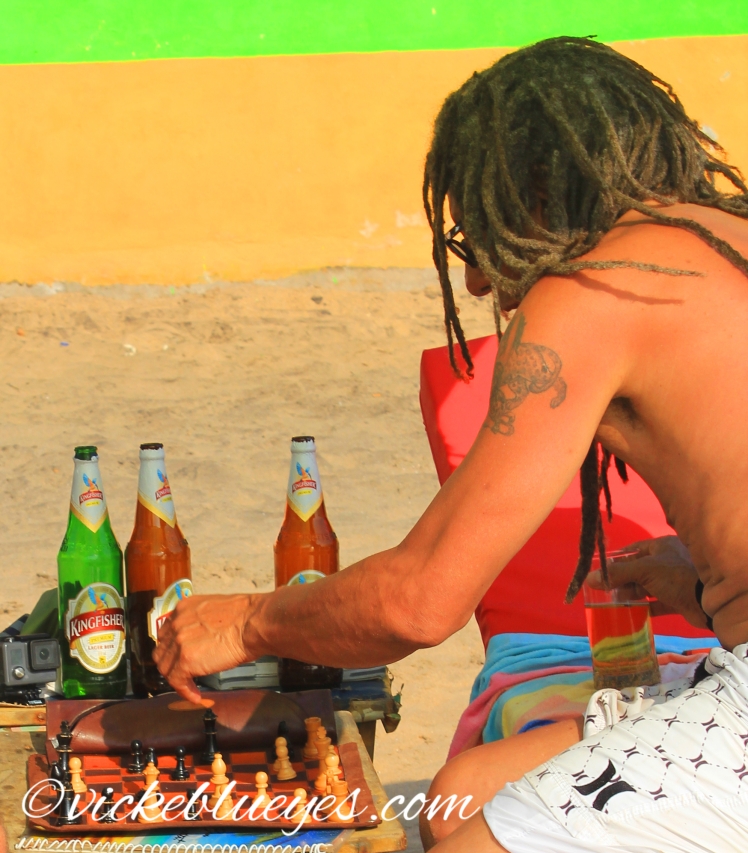 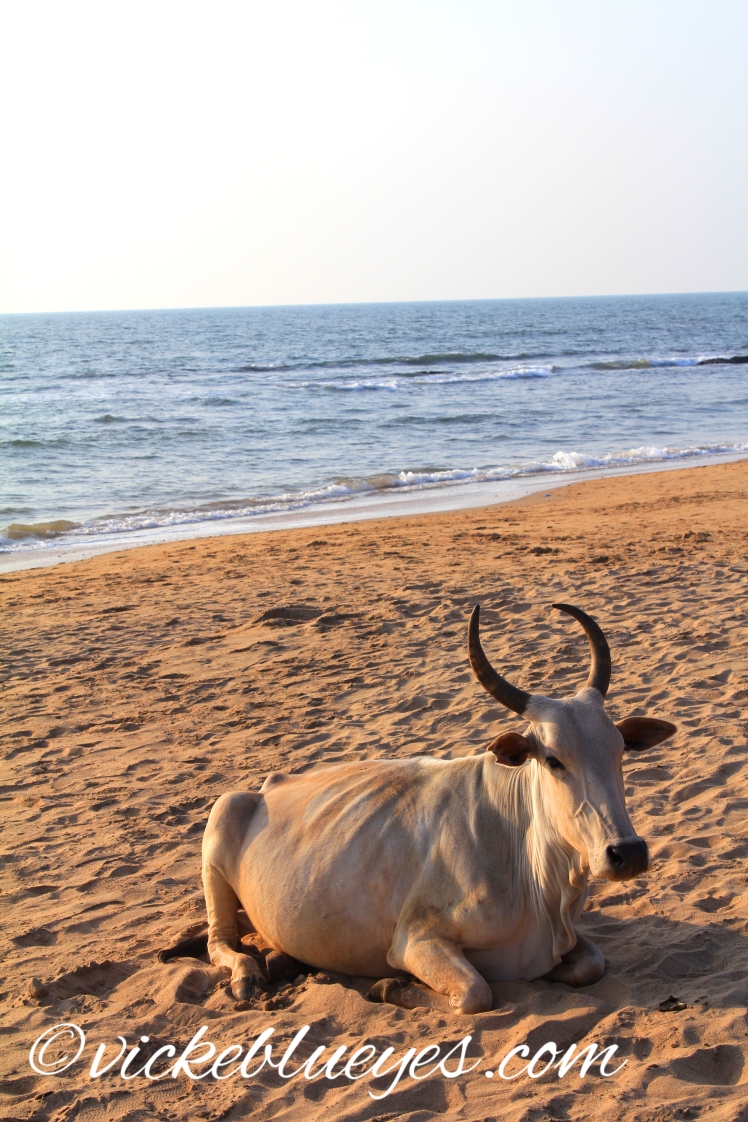 A must visit whilst in Anjuna is the famous night market, where stalls and stalls of everything you could ever hope for are sold; clothes, furniture, jewellery and musical instruments. Stands of various food from all over the world are here, imitating a music festival in the UK. Vendors sell Italian, Indian, Turkish, and Russian meals to a number of people from all over the world, who have flocked in to find a bargain or let their hair loose and dance to the different music that played. You drink next to aged expats with weathered skin from the sun to funk, soul and Motown. At the top of the market under a lit up tree is where western DJ’s play deep house. Happy to be dancing again, we visited the bar frequently to taste the missed sweet taste of dark rum and neck back shots of tequila for just 80p. After being used to no alcohol, we were taken aback to Goa’s laid back attitude to booze. Shaking our bodies to the bass with large smiles on our faces, we looked up at the large stars above us, where clouds of hashish from fellow dancers began to float above. It seemed this tree, this music, was powerful in bringing everyone and anyone together. We made friends with a newly married couple; a family who were so excited to dance with us one woman fell over, and a woman who winded and grinded alone to the music- we wondered what her Indian parents would think! It was nice to see Indians enjoy themselves, without any restrictions, and with pure freedom to do what they wanted to do. 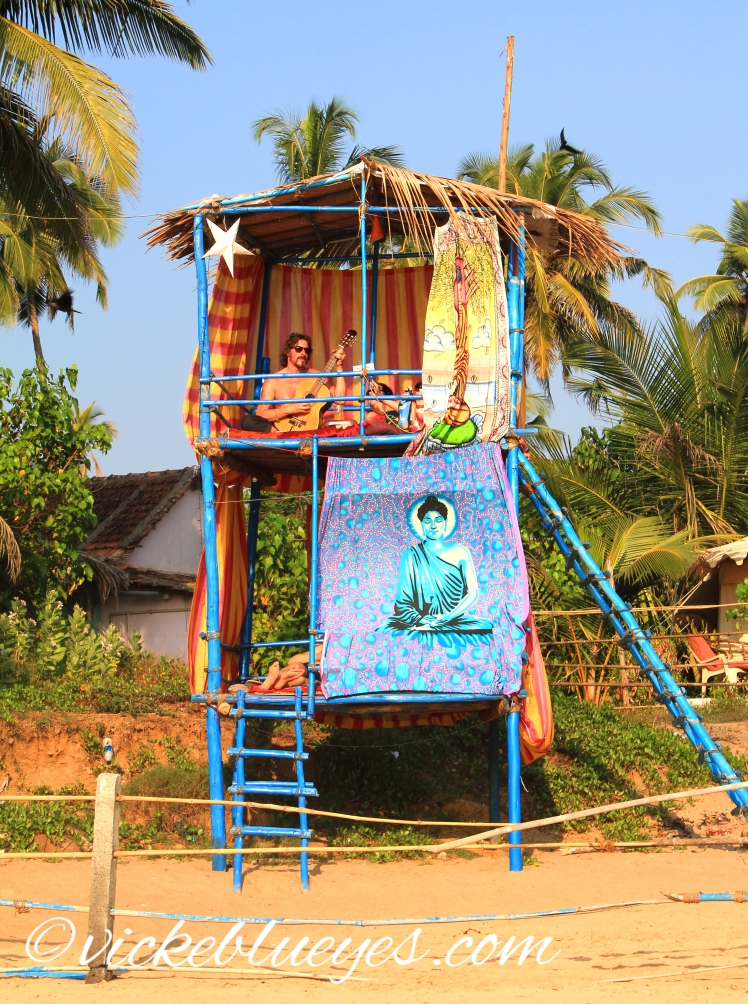 A visit to Aranbol is also a must whilst in this area of Goa. The beach is pleasant and the area has a much more laid back relaxed vibe. People came together as the sun began to set; all showing off their circus or acrobatic skills, watching talented people do tricks with pois, balancing four diabolos on a string, and numerous hula hoops, all in front of the glaring red setting sun. After, there was a drumming circle, twenty drummers, all strangers to one another, just coming together for the creation of the tribal unison of beats which many (including us) joined the circle, and began to sway our hips; stamp our feet and shake our heads in a frenzy, all collective admirers of the sounds they created.

I also visited Panaji by bus from Mapusa, a short 30 minute drive away. Arriving in the capital of Goa, I saw various boat trips and casino boats flooding the docks and float along the river. I met a family friend and her friend at the Marriott hotel. Here scents of lemongrass and floating lilies, serene smiles from the staff and the view of a pool bar by the shore welcomed me. I saw Goa from the other side of the spectrum, the side of the rich, glamorous, and luxurious. I ate at the buffet (treated by my friend Clare), where I ate fresh salad, Goan speciality dishes and rich desserts all with a glass of local white wine. This was the life. Well only for a short period of time! 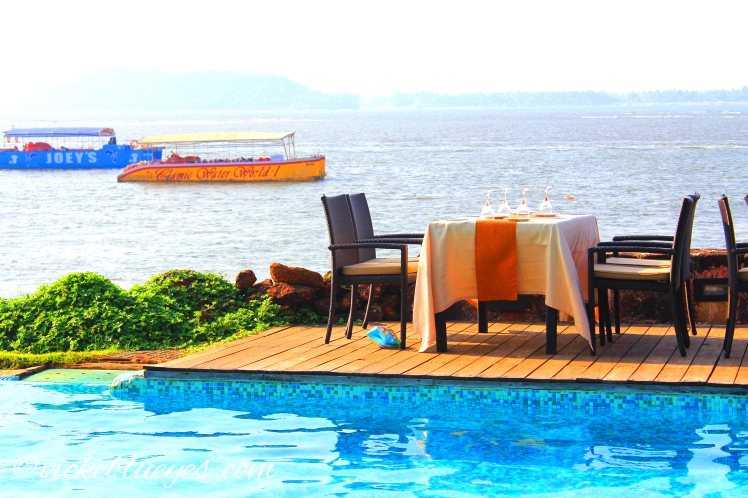 Although Goa is seen as a liberal place and all say to you- “this is Goa, anything goes”. Don’t believe them. Yes you can smoke freely, drink excessively and party hard, but to someone who has partied in globally dominated clubs in Europe, beach parties in Asia, clubs with massive DJ’s in the UK and rubbed shoulders with Actors in Barbados in exclusive clubs, I though Goa was overrated. Besides, it is still India. It is still full of men who when seeing a white woman, think they are a whore, no matter how much they cover up. It still is full of corrupt police and dirty streets that aren’t safe. So, fellow women travellers, adhere to the dress, never walk alone at night without a light (if possible make friends with others or get a taxi to your destination) and always watch your own drink in case it is spiked.

Following a recommendation from a friend, we stayed at Funky Monkey hostel in Assago. Although a tricky location (in between Mapusa, Vagator and Anjuna) the hostel made up for this by its cheap accommodation, lovely furnishings, free breakfast and internet- as well as 24 hour staff that were always up for a giggle.