Aurangabad is a town in the Maharashtra state that is filled with professionals attending business meetings and business lunches. The town is predominately Muslim, so meat is scarce, (bummer for me), although there are a few wine shops dotted around much to my own confusion. As Lily summed it up well, Arunagabad is the Birmingham of India. Not a pretty town or destination, only a good stopover to get to the Ellora and Ajanta caves, a must see attraction in India. 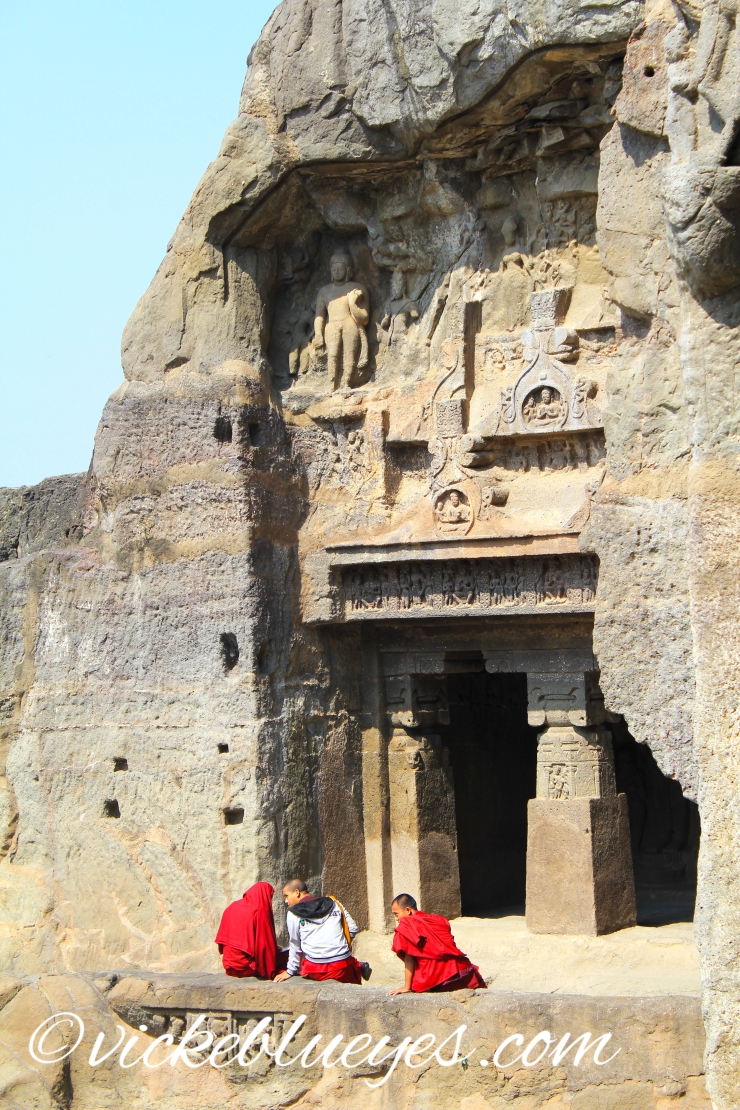 Both Ellora and Ajanta Caves are magnificent pieces of nature that have been manipulated to highlight the incredibly loyalty and faith of people towards their religion. We chose to see the Ellora caves as they only 45 minutes away from Aurangabad, whilst Ajanta is 4 hours away. So, for convenience purposes, if you are on a similar tight schedule, I have been told Ellora are the caves you should take the time to see. It is easy to get there by bus, and it only costs 40 p each. Be wary when you arrive as suddenly you make so many new “friends”, who are just interested in being your tour guide, your driver or selling you some jewellery. Crying out an Indian no- saying no three times- and then ending it with an abrupt “never’, we started with cave 1.

The area of the caves is large and will take a while for you to wander around seeing various shapes and styles, but ice cream sellers are along the way which will keep you refreshed and cool. The caves are split into three sections with three varying religions; Buddhism, Hinduism and Jainism. Although some caves are past their sell by date and are less conserved as others, it is magnificent to see the variation in styles in the numerous shapes of the caves.

With the Buddhist caves, large composed carvings of Buddha take the main stage, eyeing up all that enter. With Hindu, the carvings are intricately designed, each piece having a symbolic meaning and each pillar decorated in various patterns as well. The Jainist caves focus on the stories that are created through the carvings, and the references that are embedded within their narrative, educating those who stand and stare. The main cave, the most beautiful and the largest, is cave number 16. Pillars are carved into massive cliffs of rock and a temple is carved in the middle with many entrances and exits, elephants guarding each one. This design, art and skill the carvers bring to these caves, are astonishing and many many people just focus on visiting cave 16 in its splendour, leaving other tourists to explore the remaining caves. On the way back to Aurangabad, make sure you take the time to see the old Daulatabad fort, crumbling down but still an influential structure and one you can play goodies and baddies along the dark depths, the twists and turns of the various corridors.

We booked in advance to stay at Preetam Hotel, where the rooms are reasonably priced and sized with colourful rooms, (yey colour!) and western style bathrooms. This hotel is excellent value for money, so if you are stopping over here, I would recommend this place. Although, like the rest of India, it’s noisy so bring earplugs! Otherwise the blaring car horns will keep you awake at night.