After a delayed flight with Go India due to engine failure- exactly what you want to hear before you board a flight, we arrived in Calcutta in darkness. I know catching a flight is semi cheating, and not true backpacker style, however we didn’t have the time to fit in a 40 hour train journey, going from one side of India to the other. We had met and spoke to brave backpackers who had travelled lengthy distances across India by train, relaying their horror stories to us of delayed trains leaving them stranded in train stations for days on end, and as we shuddered with horror, we vowed to fly instead.

Sharing a taxi in Calcutta to Sudder Street, the main backpacker area, which should be more appropriately named as Shudder Street, we called up the guest house we had previously booked to say we were on our way. Nonchalantly, the receptionist replied that they were now full- and hung up. This is not the first time guest houses have given our booking away- surely to benefit themselves through someone turning up and demanding a room- so be wary when you decide to book during high season as at times, it seems a little pointless and just turning up may be the best option. We frustratingly called every hostel we could, to hear their replies of: “we are full”. Disappointed we resorted to my 5 year out of date Lonely Planet. Here we found “Centrepoint Guesthouse“ and booked a room.

Driving through Calcutta, its dark dank streets with families curled up into each other, shrouding themselves in blankets, it was obvious the city is filled with abject poverty. Being a positive person, and constantly searching for the silver lining in every grey cloud scenario, (which could make me a great or annoying travel companion depending on the sort of person you are)– I turned to Lily and said, “at least the street lamps are nice.” We turned up at the hostel and was told our room, which was the cheapest one they had to offer, of 700 rupees, was given away, however a 950 rupee room was free, (how convenient). A little out of our price range, but tired and exhausted, I climbed the stairs to check the room out before paying for it, (always a good idea to do so.) As the door swung open, the rusty nails creaked at me as if snarling, newspaper covered corners and cockroaches scuttled over each table top. The beds seemed to resemble the same metal meshing as those in S21-a torture camp in Cambodia, and the bed sheets limped on the bed as if they were hung in pain and had footmarks all over them. My gut reaction was to laugh. I was so full of shock and disgust, I laughed, (I’d rather laugh then cry) and I switched into autopilot checking for bed bugs on the mattress, seeing if the shower worked and the toilet flushed. (I give them that, at least it wasn’t Bangalore where there was a bucket for a shower and a squat for a toilet). Still, I thought to myself, 950 rupees for this shithole? I was worried about my budget and now Calcutta has terrified me with my finances, where will we stay? Descending the stairs numb with shock, Lily’s hopeful eyes looked up at me, asking “well how was it?” I quickly responded, “we need to get out of Calcutta as soon as possible.”

If there was some form of transport (bus, train or plane) outside that guest house at that current moment, saying they would be leaving Calcutta, I would have eagerly hopped on. Immediately, we went to a travel desk and booked a train for the following evening to take us to Varanasi. Once I knew we had booked our exit, I calmed down a little. We found a pricier hotel for 1,350 rupees called Neelam Hotel, which was depressing to spend on accommodation and still have “alright” lodging, but resolving we had only one night in Calcutta (and it being 11:30pm) we made do.

Nearly being a month into my 7 month trip and 4 weeks into our India trip of 10 weeks, I reflected on how India had already changed me. Being a passionate feminist, at the start of the trip, I would be happy to wait for a bus or a train out with the men, stating that outside was my space as well as their space. Now, I search for a Ladies waiting room, where I can escape the lecherous looks, I go to elevators titled “just for ladies”, (yes they exist and I find them awfully sexist) because its easier and I queue up in lines just for ladies because its quicker. This constant segregation because of our gender has made me recognize that being a young attractive (not saying this arrogantly but just as it is) European woman, you can be a target anywhere, not just in India, and I have actually been incredibly lucky for nothing to happen to me so far- touch wood– especially with the wild situations I have got myself into in my youth days and my continuous fearless search for adventure and adrenaline. It reminds me of a time when I was travelling around Australia, in Adelaide with one of my best friends and we met a guy out in Adelaide, who was cooking us dinner at his place. When I went to the toilet, I sneaked a peek into his room, (I think they tell a lot about a person) and I saw his laptop open, a freshly written status on Facebook saying: “cooking dinner for 2 European women in my house”. Finding this super creepy, I told my friend and soon after, we left.

Waking up in Calcutta the next morning, it seemed a different place to the evening before. I felt guilty that I had let my initial reaction of Calcutta taint my opinion, so we began to wander around the city. A short walk away was the Indian Museum. Here it was interesting to see a number of Buddhist, Hindu and Jain sculptures that had been collected from various parts of the country, which to our delight, were also from some places we had visited already. The sculptures were beautiful and ornate. I found it incredible that these magnificent pieces of history, could be easily hidden in various parts of India, submerging only to the trained eye of archaeologists years later. Upstairs there was an exhibition of various animals from various parts of the world, all seemingly stuffed, staring through the glass back at us creepily, So I’d advise just visiting the ground floor exhibition. 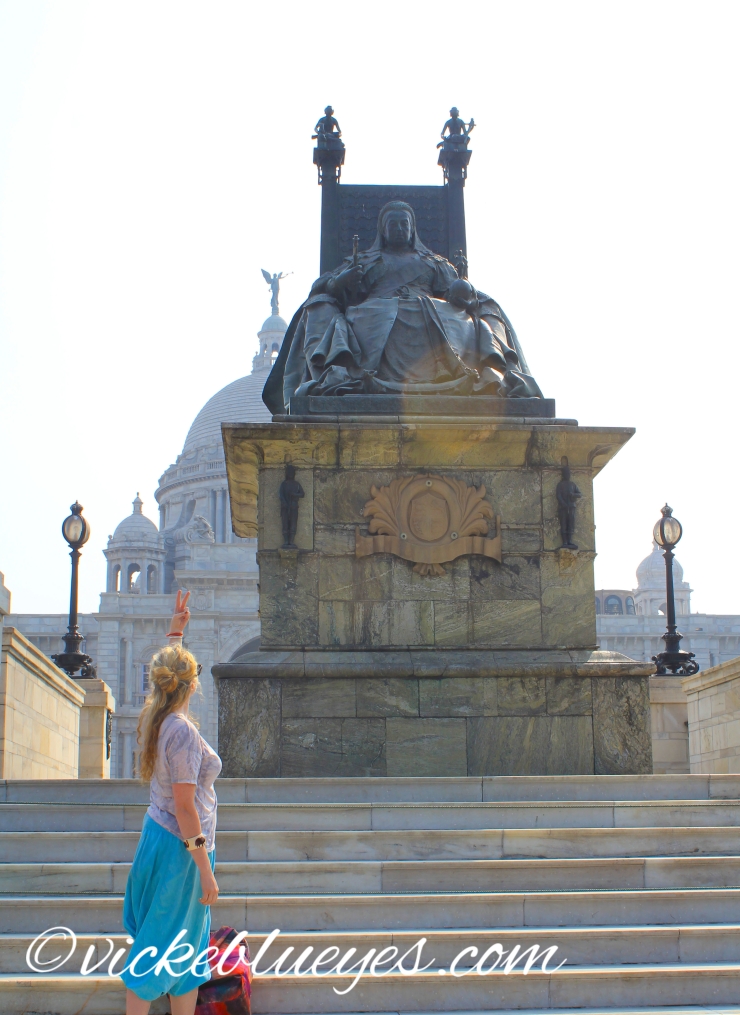 From here, stroll down busy Park Street passing shop sellers of clothes, sunglasses and all different kinds of food. We were walking to the Victoria Memorial, when a small street child came up to us crying for attention. Her hair was matted all standing up on end, her dress dirty and lifeless, and her small chubby arms were caked in dirt. As she looked up at us, her dark pupils in her eyes searched into our souls for hope, we tried to please her, giving her money and food, but to no avail. She continued to cry and plead to us, tugging at our clothing and at one point wrapping herself around Lily’s leg. We asked each other, what can we do? How can we help? We realised all she craved for was love. Giving her big hugs, we wished we could take with us, even for the day, but her brothers looked on from a far, emotionless and impassive, already accepting of their future. It’s horrible to see someone so young, already feel so unwanted, so unloved in the world that they cry out for foreigners to help. We know the future of her life, her outcome most likely to be a prostitute, a beggar or even death. With heartbreaking steps, we walked on, distressed by her. (If we were distressed just imagine how she felt, times it by ten and then you can probably understand the extent of her emotions). 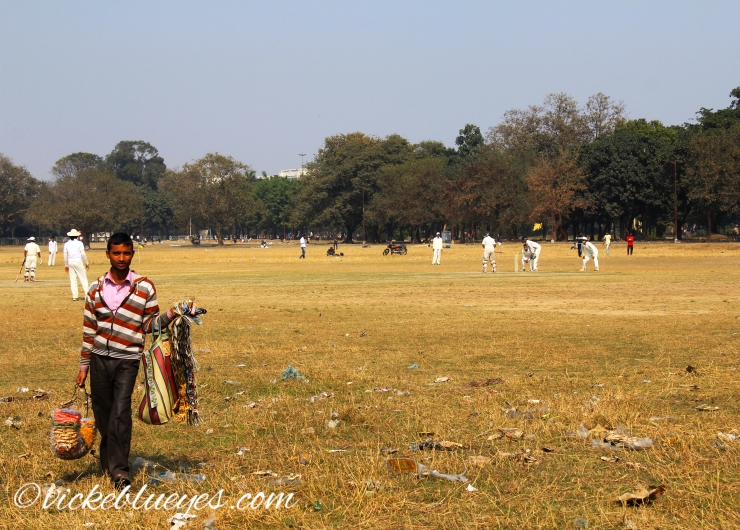 Walking through The Maidian, a park near to Victoria Memorial, we saw cricket players and friends gather in a litter filled park. It was shocking to see so much litter in one area, it seemed worse that the state of fields after UK festivals. Whilst here, people sat casually chatting and snacking, surrounding themselves with plastic and wrappings of various parts. Contrasting to this, was when we arrived at Victoria Memorial. An imposing mass of marble, (although spectacular) is an obvious implement of colonisation with manicured lawns surrounding it. As families struck happy poses outside, we stuck our tongues out and our fingers up at such remnants of what our past forefathers did to the nation we were exploring. Inside, feel free to have a wander, there is an exhibition (12 walls of how we screwed over India in a dimly lit room) which I chose not to venture into. There are also paintings through the eyes of “a white rich Englishman” and how he saw India at the time, which is interesting yet disgusting at the same time, (I am not a fan of any hunting, let alone tiger hunting).

Leaving the memorial take the west exit, and stroll to the Academy of Fine Arts, where local artists can exhibit their work, similar to the sort of style in Mumbai, but here you can actually purchase the work of these artists, (which if we were holidaymakers we definitely would have done.) I preferred the environment here than to the Victoria Memorial, focusing on India’s triumphs, rather than our triumphs over them, in their own country.

Make sure you don’t miss a visit to Mother Teresa’s Mother house, the missionary which she created, filled with nuns wearing blue and white habits, clutching rosary beads and giving us warm smiles. Her hopes, dreams and achievements displayed on boards moved us to tears. Although missionary work is regarded as controversial; her dutifulness to others, aspirations of giving and her perception of the poor, were words that were so welcoming and enlightening, even those strongly against the work that she did, would have been moved. With a sermon going on in the chapel, and beautiful voices singing hymns, we sat by her tomb, thoughts of losing a legend on our minds.

Leaving here, we walked past Tyre sellers and shoe shopkeepers, highlighting that each shopkeeper has a different produce, a different product, a different skill, creating a lot of business’s to flourish and thrive. Walking through various streets, we soon found ourselves lost- much to my own excitement. I love being lost in a city, and I have been a number of times, in Auckland, Melbourne, Bangkok, Rome and even in London. Through doing this, then you really get to see the ins and outs of a city, seeing what daily life is like, catching glimpses of alleyways that you are unable to see in a taxi. Reluctant not to give up, I asked passer bys to point us in the right direction of Sudder Street. Soon we were heading in the right direction as the night market came alive, hawkers crying and laughing at me when I began to film their daily tasks.

We made it back to our street where we had dinner at Blue Sky Cafe, a lovely establishment filled with meaty curries, (I’m talking about the sauce here), quick good service and reasonable prices- so eat here in Calcutta!