Our guidebooks and other backpackers had continuously told us to “prepare ourselves” for the hustle and bustle of Varanasi. However, we felt Varanasi wasn’t as hectic as imagined. Yes it was nice to see all different types of tourists: western holidaymakers, locals from various parts of India, pilgrims, backpackers and flash packers, but we found a similar volume and extent of tourists in Goa. The hawkers trying to sells us silks and jewellery we found everywhere we went and were reminiscent of Mysore Bazaar or Fort Cochin, and the pain and suffering we saw was reminiscent of Calcutta. I think being in India for a month previous to our visit to one of the holiest places in the world, had already prepared us for what was in store. For those who are not accustomed to India’s habits, I am sure the sights; smells, sounds and colours of Varanasi will overwhelm you. 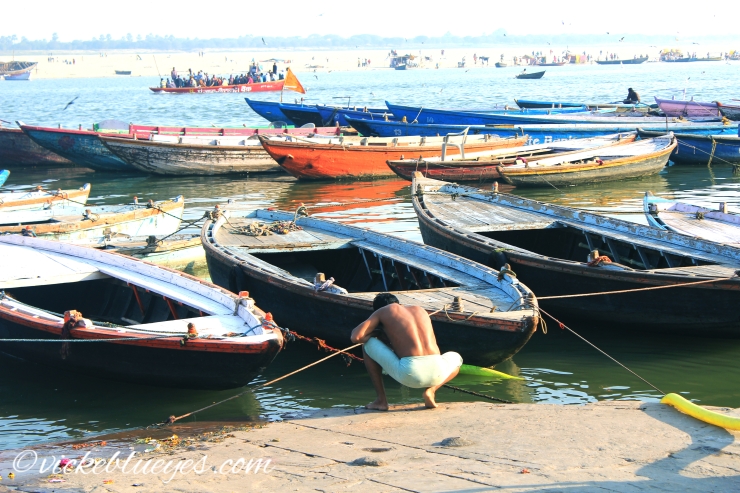 The main ghat has a high concentration of beggars, sellers and injured all looking for physical or financial prosperity by the holy Ganges. People arrive with bags from distant places, hoping to wash away their pain and hurt in the holy river. Whilst locals who live there play games of cricket and cards by the riverside, fitting into the scenery as naturally as the flowing of the river, not phased by the influx of tourists surrounding them. You will be constantly questioned by rowers if you would like to hire a boat, but do not let this anger you, they are just trying to get custom. Interesting vibrant street art of holy images and political messages curb the walls, juxtaposing with the cheery bright colours of various houses dotted along the river side. Make sure you walk from Manikarnika ghat to Assi ghat, allowing yourself to see the various ghats and the purpose for each one.

The main burning ghat is Manikarnika ghat and stirred odd feelings within me. Ignoring men asking us to be our guide or if we “want a better view”, we sat and watched the flames lick and curl stacks of wood whilst heads and legs stuck out of the embers slowly burning. The numerous piles of wood are all neatly collected and organized, all weighed out by metal scales, making the process seem orderly and robotic. I felt the funeral was impersonal and lacking in intimacy, although it is one of the holiest ways to die in India, escaping the endless cycle of reincarnation. We managed to lose ourselves within Varanasi city a few hours later and found ourselves choking on smoke down one of the side streets. I walked close to the source of the heat and found an open room where a body was being burnt inside a building, and the mourners standing around it within the building. I shuddered as the smell consumed my nostrils and clung to my clothes. Not all who come here can afford a glorious death by the river. 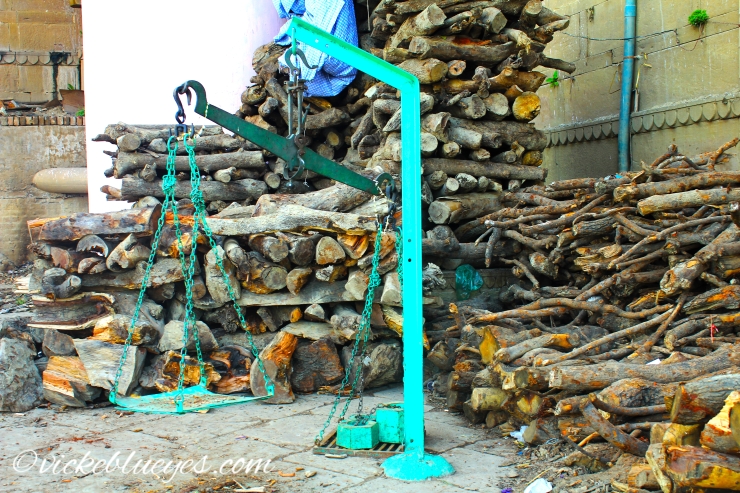 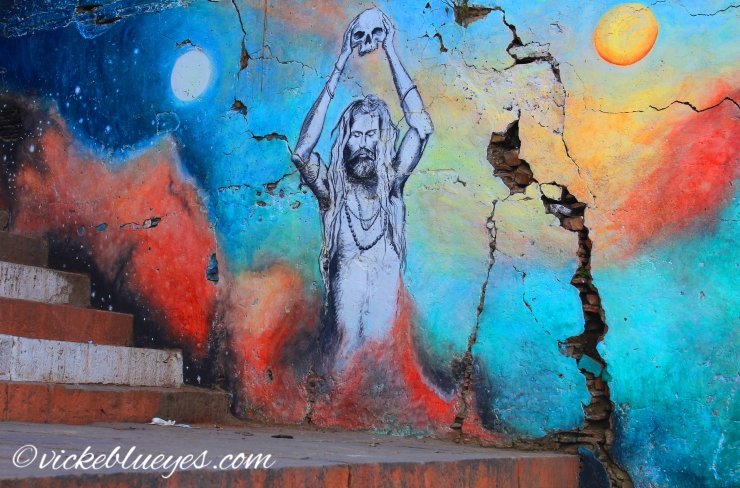 Make sure you see the daily evening ceremony of Puja (it starts around 6). Here, swarms of tourists take pictures and light candles, releasing flowers onto the river, watching the flickering lights float into the distance. Whilst holy men with their dreads and colourful turbans, sit in a trance like state, in an ecstatic union with the singers of Puja, the music lifts them into a higher state, the incense slowly swirling around the dancers, swimming in the air. Traditionally, it is a sitting down ceremony, so make sure you come early to get a good view, some tourists get boats on the river, floating whilst they watch the splendour. After being asked to buy/donate/be blessed 12 times in 15 minutes, we decided to escape and have dinner at the Dolphin restaurant. A bit pricey for us, but it had a phenomenal view of the ceremony and Varanasi, as well as superb dishes (I had chicken Pasanda) so I do recommend dining here. 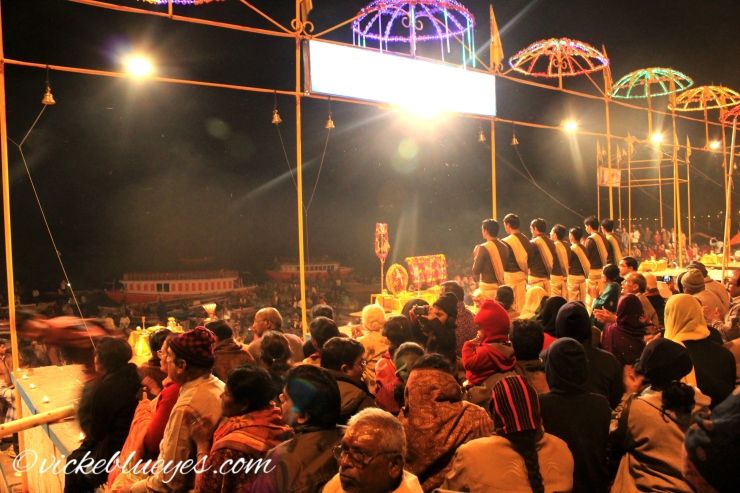 The next day we hired a boat early in the morning, (the best way to see the entirety of Varanasi) with some new friends we made. The best time to see Varanasi is at dawn or early morning, although make sure you organise a boat the day before and the exact amount, route and currency, (as well as repeating all this on the day) to avoid scams and confusion- our boat man had protested we had not told him the exact route although our hostel owner had told him. Prices for a boat are an average of 100 rupees. Floating along the river we saw families dipping themselves early in the Ganges, men separate from the women. Men of all ages, jumping with joy into the river, donning white loin clothes, whilst the ladies are dressed in stunning saris and dip into the river with ease and giggle at one another, blessing the water whilst they dampen their bodies. We passed men breaking into a sweat slapping wet clothes on stone rocks, hitting the side over and over, fishermen hoping for a catch, and the smaller burning ghat, where we saw ashes being scooped into baskets and let loose into the Ganges, the black soot smothering the river. As the boat man happily told us he swims everyday in the river, we questioned the hygiene of the river, concluding that the water is definitely septic. A constant cycle of life, death and birth are situated around the river and it is powerful to see, although definitely no swimming for me. 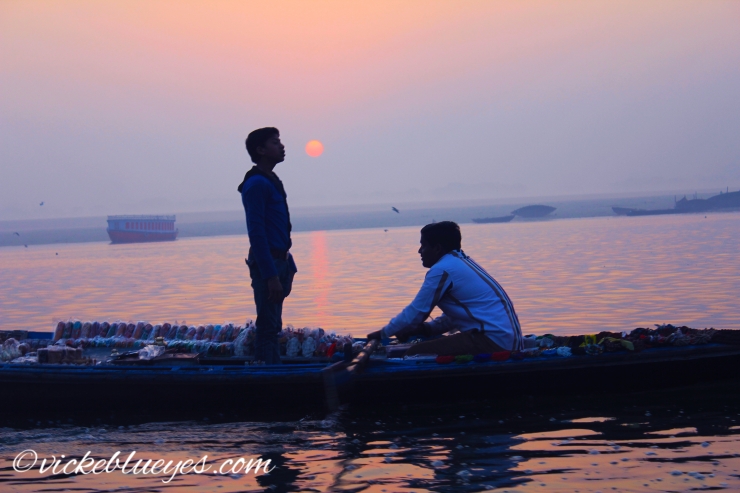 Although yoga can be taken anywhere in India, because we had the time to, we took a yoga class in Varanasi at the Yoga Training Centre. A subtle blend of meditation, chanting, basic and intermediate exercises allowed us to stretch our bodies, toning and improving our physical and mental state. First we were initially wary because we had a male instructor, reading about over friendly instructors, although here we did not have this issue. Throughout the class, our teacher Anad Ji spoke about the benefits of each exercise and relentlessly told us about our “energies”, which some people would have not been able to keep a straight face to, but with me, I felt the complete opposite. Already I feel India has influenced me spiritually, and how I feel as a human, reflecting on the way I see myself and others- it is hard not feel any influence of the incredibly holy places and religious people you see.

So this yoga lesson pushed my interest into Buddhism even further, the simple sentence spoke by Anad Ji, “you have the right to health and happiness”, pushing me close to tears and wishing that all humans could have this right as well and embed it into their lifestyle. It furthered my passion for yoga, pushing me to take yoga classes in each country I go to, and for yoga to become a continuous habit that I hope to thrive in at home. Our teacher was very jolly, forcing us to laugh manically for no reason other than to spread joy and happiness within ourselves, as well as onto the world, which we have now resolved to do when faced with a long delay or another kind of hiccup India throws at us, lifting the situation which we are in.

Other great places to eat at in Varanasi are the pleasant and cheap vegetarian cafe, Niyata, the Dosa Cafe, which transformed how I thought about dosas and my negative experiences with them. The texture was soft and crunchy, not thin and paper like, as well as the abundance of flavours meant a variety of choices were to be made. Or, have a delightful breakfast at Brown Bread Bakery, a bakery that includes in its price, donations to vulnerable families and children, even allowing them to stay in one section of the restaurant building, giving them space and time to stand on their own two feet. Sitting on the rooftop, munch amazing bread and cheese whilst watching monkeys swing along the urban landscape of rooftops, up and down, in and out of houses, whilst families sun and stretch themselves hanging out large colourful masses of fabrics to dry.