In the same state as Manali, there is a mountain village which takes any visitor to an entirely different place, where different customs and way of life replaces those that were once rooted here. The area is named Mcleod Ganj and how it differs to other mountainous retreats is that here the Dalai Lama and the Tibetan government-in-exile, reside here. Thousands of Tibetan refugees escaped the oppressive perils within Tibet, seeking independence and recluse from the powerful and destructive regimes of China. 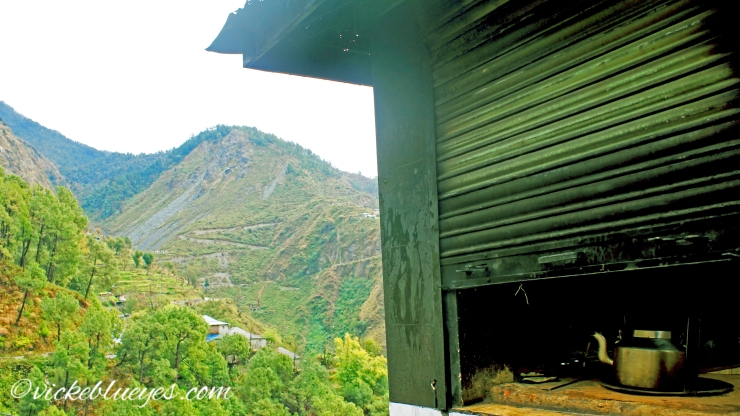 The streets are lined with colourful and ornate Buddhist temples with scriptures on to inspire all that circle (clockwise) around these magnificent pieces of architecture. Slide your hand along the spinning prayer wheels, allowing them to rotate for your future health and well-being. Tibetan handicraft shops are on every street corner, colourful flags flutter in the wind, as if waving their message to all passers by and women stand over metal pots cooking momo’s (a dumpling) fresh for their hungry customers. Paintings of slogans exclaiming “Free Tibet” don the walls artistically and Tibetan flags hang proudly, knowing that here they can-unlike in Tibet. Monks in maroon robes wrap themselves away from the bracing winds and walk the streets hunting for a warming bowl of local noodle soup- Thenthuk. It is quite an odd sight to get used to seeing in India, but soon the only thing that will remind you that you are in India are the tuk tuk and taxi drivers insisting you to get in their vehicle and become their customer. 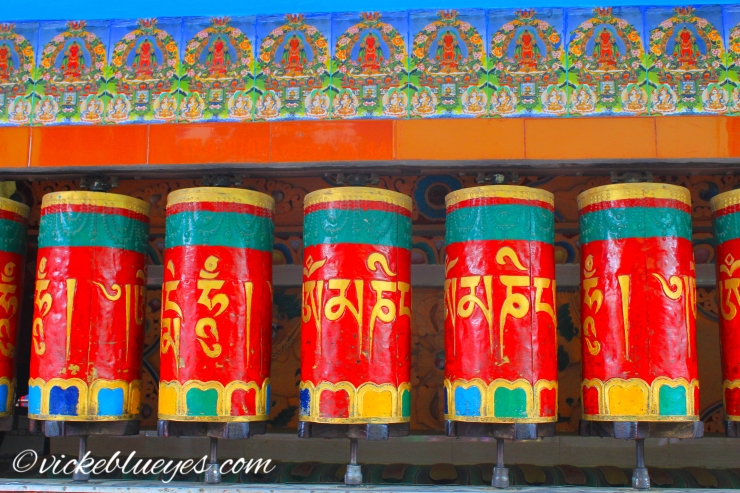 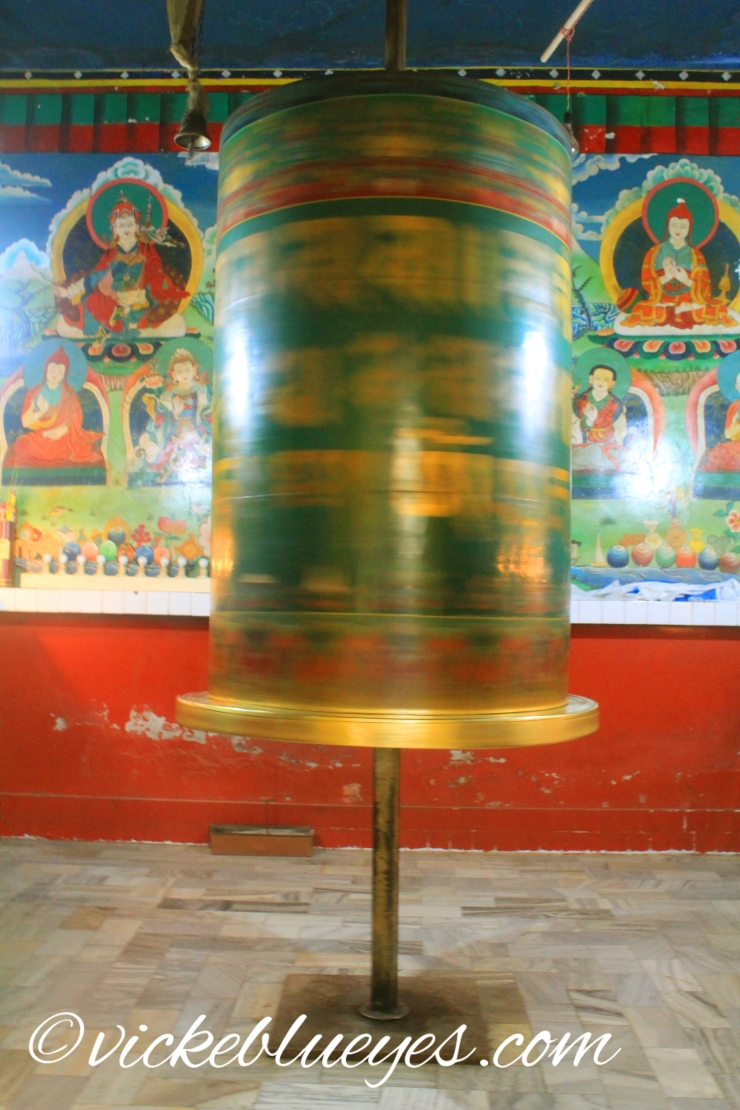 Whilst you are in Mcleod Ganj take the opportunity to learn about Tibet: the language, the people, the culture and their sufferings. I’m ashamed to say, that I did not know the full ins and outs of what is occurring in Tibet right now, until I arrived here and it has changed me. Head to the Tibetan museum where you can read first hand experiences of what the Chinese government are doing to Tibet, how they are eradicating Tibet’s cultural and national identity due to their destructive and arrogant greed. This issue has been swept under the rug in the western world. We are not told the full details of these happenings because of our powerful ally with China-but this needs to change. I have begun to start telling my friends about what I have learnt, already increasing the circle of knowledge and I plan to tell all that listen-including partaking in protests in London on my return. I have vowed never to go to China until they free Tibet, I’ve always wanted to explore the vast country and on my bucket list: skateboard along the wall of china, however for me, the injustices this country is forcing upon another is too much for me to bear. Although it is a small move, my opposement towards this country is shown by not visiting China, its my way of saying-I am not happy with the way they treat other human beings.

In the museum make sure you watch the harrowing documentary you pay an extra 10 rupees for. It is a fantastic screen play, visually and aesthetically beautiful, portraying both sides of the argument for China about Tibet and how the Dalai Lama should react to the situation and his hopeful approaches. It is incredibly emotional, so be prepared for this. Whilst you are in the area make sure you go to the Dalai Lama temple– where the Dalai Lama does his teachings. We went here on a day with no event and another time when the Dalai Lama held the Long Life Ceremony. Both times our experiences were emotionally powerful. Sitting down on the floor you are surrounded by a gulf of roped monks chanting and swaying in unison, generating a melodic hum which seems almost trance like. The monks are of all different ages, genders, backgrounds and races, all sit side by side with shaved heads clutching prayer books. Its funny to see young monks punch and laugh with each other, opposing the Buddhists peaceful attitude but also illustrating that the monks are still humans at the end of the day, some are still little kids. 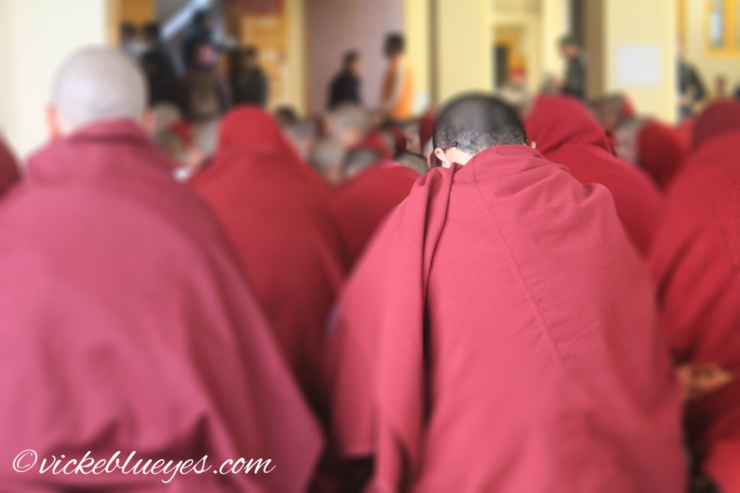 Try and tie in visiting Mcleod Ganj with one of the Dalai Lama’s ceremonies as it is exceptional. People flock from all over the globe and wait patiently to see him. Some come over from Tibet just to catch a glimpse of him and their emotional responses are heart warming to see. The ceremony kick-started with traditional dancing and singing, and as His Holiness wandered down the main way, a hushed silence bestowed the room and all started to bow. Everyone breakfasted together, on butter tea and Tibetan bread, making this private meal personal- shared with everyone and anyone. The ceremony was four hours long filled with prayers and the receiving of gifts. Even on our end we received gifts or blessings-they are appropriately called, from the Dalai Lama himself. Money was given to the monks and packets of crisps, biscuits and bananas were hurled into the air with excitement, all of us dodging these food missiles, as if trying to knock down a coconut at a coconut shy at a village fair. We chatted to a friendly monk next to us who told us of what certain aspects of the ceremony meant-which was very kind and considerate as the whole procedure was in Tibetan. Although it was only prayers and not a teaching in English, it was still a memorable experience. I still cried out when I saw him and I still laughed when he laughed. His happiness brought me happiness and the day I saw the Dalai Lama, will be something I never forget. 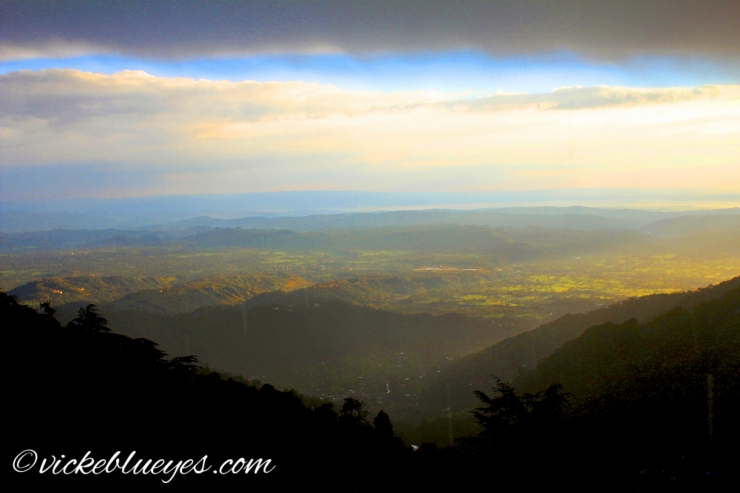 Other sights in Mcleod Ganj to check out  are the Tibetan library and a trek up to Triunde. A beautiful 18k hike up to some snowy peaks offers escapism and solicitude from the village of Mcleod Ganj. Unfortunately every day we were there, horrific rain storms commenced. Hail, lightening and thunder descended on this small town as if God was letting his full wrath upon the community who lived here. The only day which was pleasant for trekking was the day the Dalai Lama delivered his ceremony (as if fate-only on the Dalai Lama’s return will the clouds disperse and the sun shine through). One night we visited our friends house near to Gullu Temple, up far away in the hidden depths of the mountains, which allowed us to appreciate what real mountain life was like. Hidden way from a main road and amongst a forest of green, we sipped rum by the fire and swapped life hopes and ambitions. If you have the time, trek to this temple, the journey is a breathtaking sight.

We stayed at Om hostel, run by a Tibetan family who were really kind- although a little confusing. Rooms are basic but the price is good (350 rupees for twin and shared bathroom), the views are incredible- here you can gaze out and watch birds of prey escalate and descend into the air, their large wings hugging the sky- straight from the comfort of your warm bed. We had good food at Punjabi Dhaba (Indian Food), Namgyal Cafe– by Om hostel and try the Roquefort cheese, walnut and tomato pizza! As well as Clay Oven and Four Seasons Cafe. 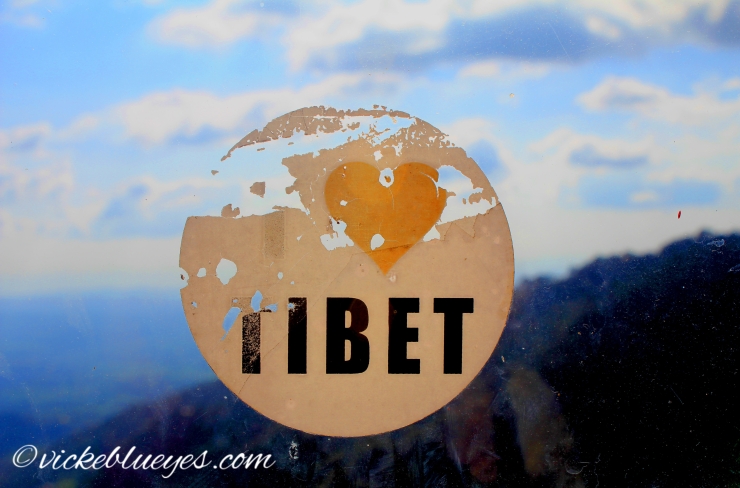