Speaking to many backpackers about Kathmandu before I had arrived in Kathmandu, created a negative idea of what the city would be like. Coming from quiet, sleepy and calming Lumbini to Kathmandu was more of a shock to the system. Yes its dirty, dusty and congested, with people consistently hawking for your attention and throwing merchandise in your face- but isn’t every big city in Asia similar to this? So although I had been given negative reviews, the noise and air pollution wasn’t as bad as I thought, unlike Bangkok or Delhi.

Kathmandu city feels like a balancing act of buildings selling various household electronic goods and food establishments. Each building jostles for attention, with massive plastic colourful signs hanging off sides of walls, urging you to look at, as if a child demanding your attention. Streets to me look similar, a continuous maze broken up by a sight oddly placed in the city, as if a form of a play station game- gaining a point every time you locate a tourist attraction. Tourists flock to the safety of Thamel, where this district resembles any other tourist area in Asia. However, I did not spend much time in the area of Thamel because I was couchsurfing, and so I stayed in the upper class and swanky district of Lazimpat– where plush hotels and jazz bars are a plenty.

For sights, head to The Old Town. This area is beautiful as ornate carvings are etched out onto dark wood, whilst underneath these hangings and structures are shops selling tourist knick knacks that could tempt even the most broke backpacker. Wander through old town and you will see the magnificent Boudhanath Stupa, the holiest and biggest Tibetan Buddhist temple outside of Tibet. Looking up at the sight which encompasses every postcard in the country, does give you a thrill of excitement. Stroll around the temple- clockwise of course- underneath flapping Tibetan flags and lazy pigeons that peck around your feet. 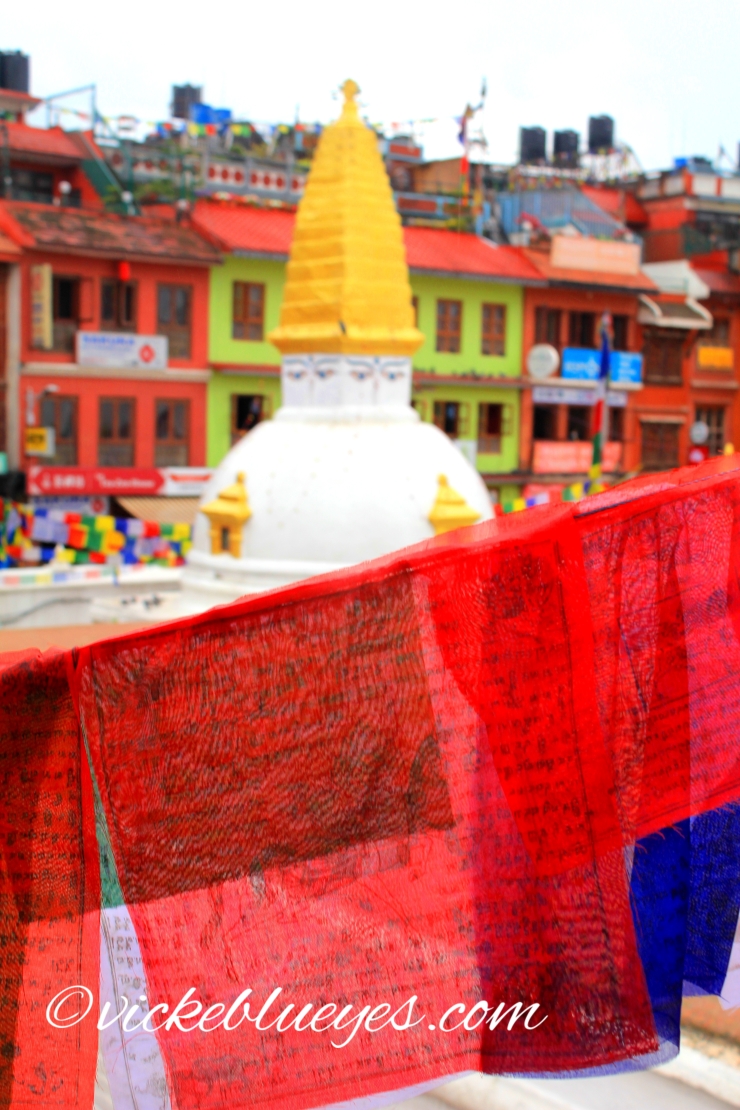 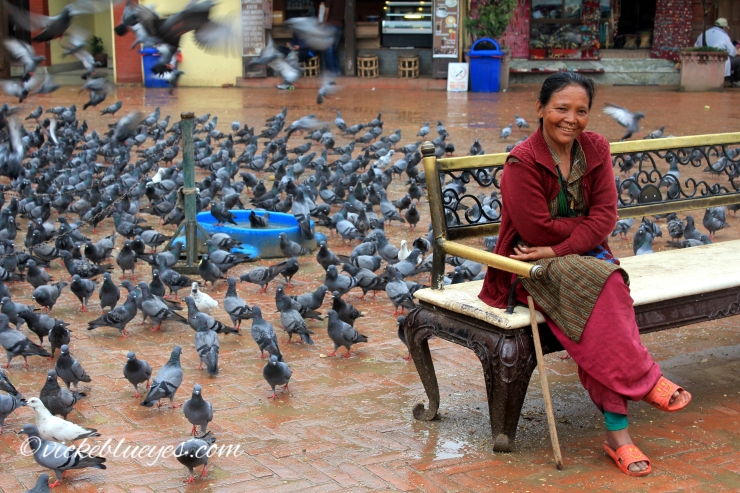 Kings Palace is a sight that I was recommended to go to, however looking through the mansion, I felt a little let down. The structure of the building was extensive and the sharp pointy edges of the roof jutted out in precision. It is interesting to see the many rooms; the Grand Hall– which is by far the best room because of the numerous Hindu deities painted above creating a surreal audience of holiness viewing your actions, as well as being horrified by the number and variety of stuffed wild animals, however, similar to Lumbini- the lack of information about the family and the ghastly ending they faced is insufficient. Without the historical and cultural impact the family had on the country and the people of the nation, a tourist finds it hard to connect with the palace and what occurred in it and who they were. Without this important information, unfortunately, the palace just seems to be a grand building that leaves little impact.

Durbar square is the most famous sight in Kathmandu. It is filled with temples and buildings in a similar style to the Kings Palace, highlighting the Nepalese architecture of angular layers. Walk along the cobblestones exploring the street corners meandering off main streets and watch Nepalese locals sip chai and ironically, gamble in a game with coffee beans inside these ancient temples. Ignore the wallahs of young rickshaw drivers and dodge motorbikes zooming through the square. The area is beautiful, and it being a rainy day on my visit, meant that there were very little other tourists in the square.

Monkey temple is another sight to see in Kathmandu. Perched high on a hill, monkeys and dogs squabble and bark at each other over temple offerings to nibble at. Monkeys climb Buddhist stupas and clamber over Nepalese flags above, whilst the view of Kathmandu spreads out below you as if a magic carpet of various shaped houses. Its definitely my favourite monkey temple by far. 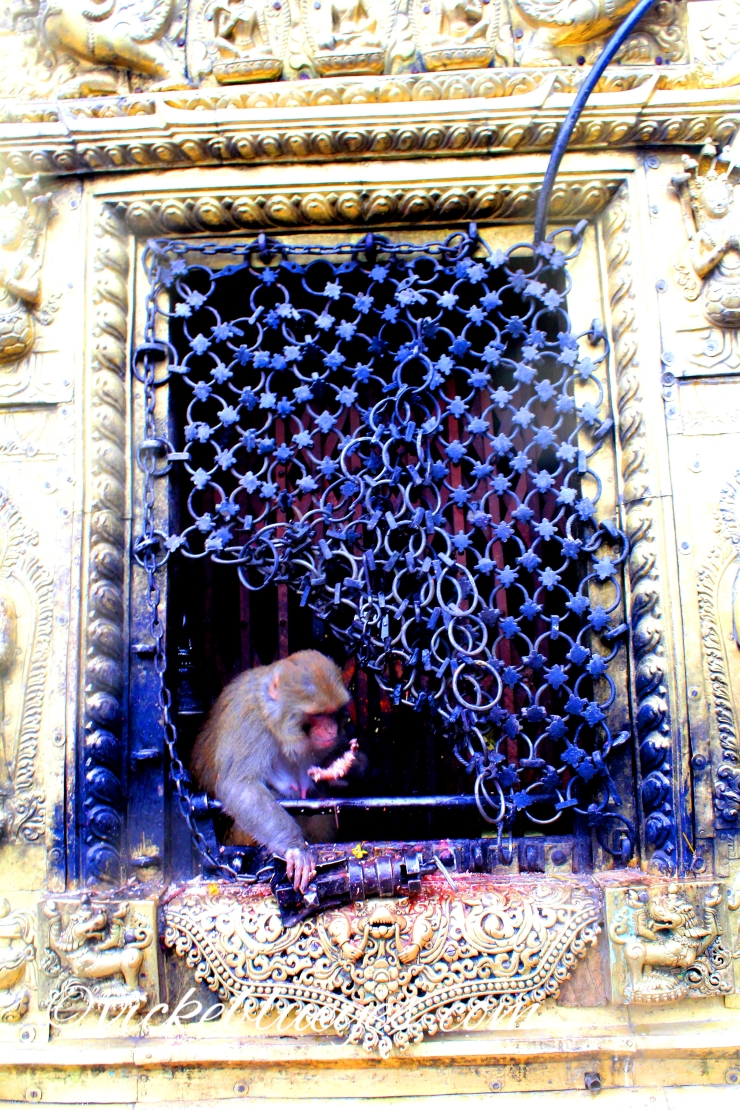 Other sights to see in Kathmandu are The Garden Of Dreams, a park acting as an oasis of solitude and peace from the hustle and bustle of Kathmandu. Doze in the sun on the neatly manicured lawns or pass time cloud watching, allowing yourself a quiet moment away from Kathmandu. A trip to Dwarika Hotel is a must (for a quick overpriced drink). Step into the plush interior of this historically sight cum hotel, allowing yourself to see the various generations resurrected and created within the building itself, (Dwarika created the hotel from materials of crumbling ancient palaces) which creates an aesthetically pleasing dynamic. 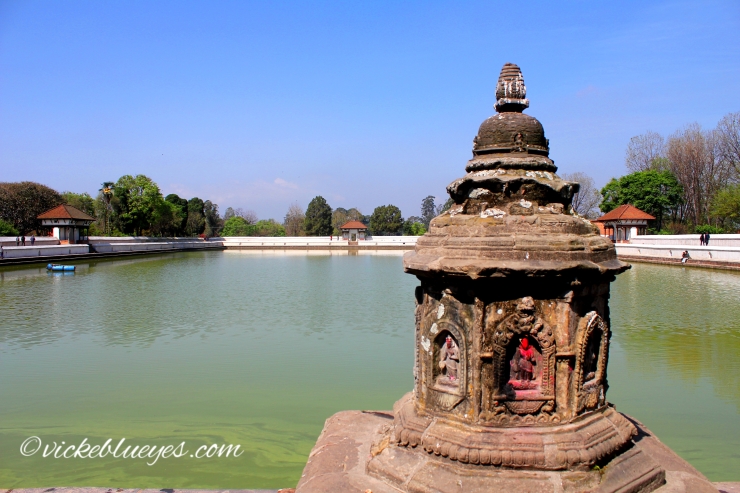 If you don’t enjoy Kathmandu, there are neighbouring places that are much more beautiful and are only a short ride away. Bhaktapur (where also has a Durbar Square due to the ancient three kingdoms of Kathmandu, Patan and Bhaktapur all having Durbar Squares), but by far, this one is the most spectacular. The town acts and lives as if from a hundred years ago, and very little has changed. Women wash their sheets in the picturesque streets and gap toothed happy old men pose for my pictures, whilst sitting on a street corner chatting the afternoon away. The carvings are more intricate and the temples are focused on paths to enlightenment and inner beauty rather than winning a lucky streak, like in Kathmandu. 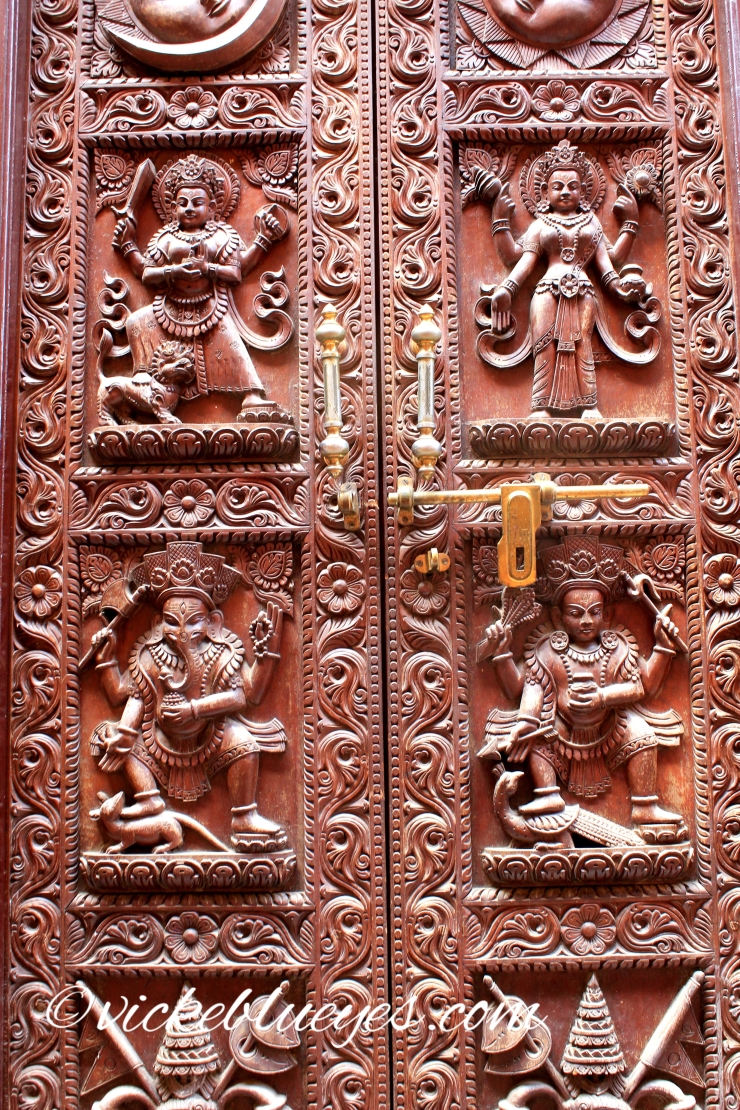 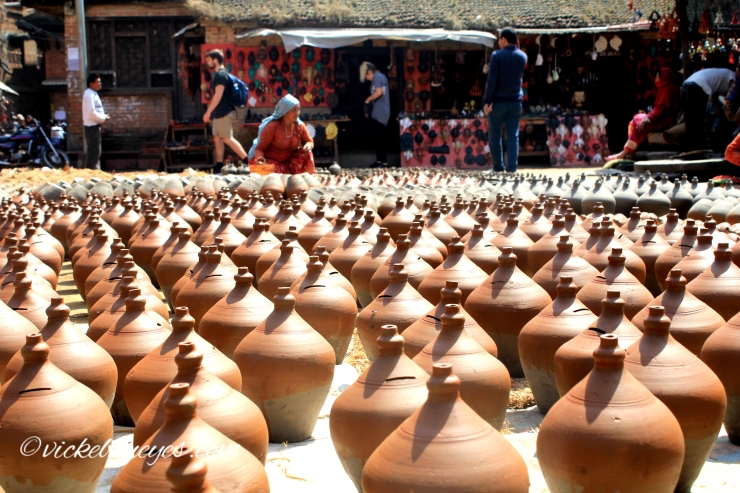 Tourists follow guides, learning about the technical names of buildings, whilst I conjured up mental images of past kings and queens who went for amble strolls around the square. Head over to The Potters Square to see the vast amount of items made from clay by the potter, whilst his wife leaves them out basking and glazing in the simmering sun. From here we ventured up to Nagarkot, a prime location for the trading route between Kathmandu and Tibet years ago, now a known destination for perfect sunrise and sunsets for tourists who dislike to trek, but still want to appreciate the mountain view. We caught a lift up to the top of the mountain, rather than trekking which most other tourists do. I’ve been told its a 4 hour slow ascent to the top, which isn’t too difficult due to the flatness of the path.

Because I couch surfed in Kathmandu, I can’t tell you of great bars or cheap haunts for backpackers to go to, or accommodation either. Myself and another backpacker were wined and dined at lovely restaurants such as Embassy and Reef– an underwater style of restaurant with an enthusiastic live band. Thamel is filled to the brim with tourists and establishments created for tourists so it is easy to accommodate and you will find something to suffice.