Leaving Kandy behind was perhaps the best thing I did whilst in Kandy, not because I had a disliking to the place, but because of the magnificent sights I saw. Catching a train to Nuwara Eliya means you get the most of out of the journey by travelling comfortably with breathtaking views. Trains get booked up pretty sharpish so 3rd class was my only option- which turned out to be like the trains I am used to back home, so no problem there. Tickets are cheap, and I advise reserving a window seat on the train before hand, which is almost 10 times the price of the actual ticket, but worth it. This guarantees some views, although unfortunately most of the views are on one side, luckily the side I was sitting, so I was able to admire comfortably. If you pick the short straw, there are doors to hang out of- which offer much more fun.

Sharing a cabin with a family from Kandy who were on holiday for one night of Karaoke the father told me, meant that I had my fair share of onion chilly sandwiches and children’s drama. Drowning out the cheeky clambering children next to me, I plugged in my music and watched the world whiz past. The views were astonishing. Different levels of green; different forms of trees and foliage stand among rolling hills of neatly arranged tea leaves, creating one massive blur of green, as if someone went hay wire and painted the entire country one colour. Sleepy towns with waving children, inquisitive dogs and tea workers plucking ferociously in time with each other, broke up the scenery. A train ride from Kandy to Ella or Nuwara Eliya is must do when in Sri Lanka.

I arrived just in time for afternoon tea at the Grand Hotel. Nuwara Eliya- known for its “Little Britain” feel- not the television series but mini England, is further exemplified at this luxurious hotel. Arriving dressed in my poshest attire, I felt awkward and out of place. Pointed in the right direction, I sat comfortably looking out onto the horizon, whilst drinking endless cups of tea and indulging in 5 plates of buffet nibbles- they had no idea what to expect when a ravenous backpacker turned up. Watched by a bemused chef, I scoffed sushi and vol-Au-vont, much to my own delight. Although 850 rupees, the amount of food, quality and the atmosphere is worth splurging on.

The town itself of Nuwara Eliya has little attractions. Red postboxes stand outside of the post office, reminiscent of London, and golf courses stand among shops selling plastic brooms and bins. The town is very small, and the main attractions surround the area. I recommend a trip to Horton Plains, a national park an hour drive away. Here, walk on layers of colourful volcanic rock, past meandering rivers and through sweeping landscapes similar to the moors in Dartmoor. Thanks to the fantastic guide I hired through my guest house, we had flora, fauna and species of wildlife pointed out to us. I learnt about the uses of certain flowers, the terminology of them- as well as the variation in a number of different languages, did you know deer in Chinese is loo? I saw scaly lizards darting their tongues out at me, butterflies fluttering past, and samba deer stop and stare at us, at the sounds of our footprints. 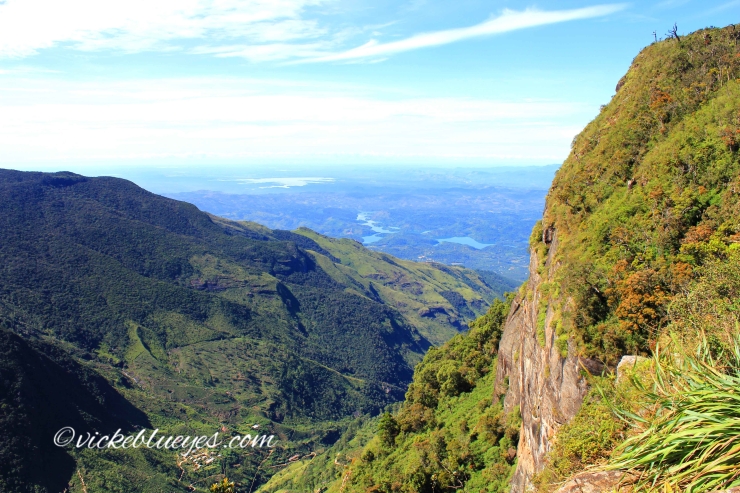 When reaching World’s End, you will be taken aback by the incredible view. Mountains of abundant and dense forest smother the hills that dip and dive, joining with blue broad lagoons and national reservoirs which stretch out as far as the eye can see. A lovely day out, and well worth staying over night here for.

I stayed at Victoria Inn– sister to Secret Tree Hostel, but a cheaper version of the hostel which offered the same tours, with a jeep taking you to the park. Rooms are pretty basic, and with a bathroom attached, expect to pay 2 thousand rupees.