Dieng Plateau is a hidden prized spot on the island of Java, tucked away from the main tourist route of Jarkarta to Yogyakarta. Although a distant place to reach, the breathtaking scenery is well worth it. High up in the mountains, Dieng Plateau is a flat marshy land filled with emerald and azure lakes, sulphurous bubbling craters and endless rice terraces that are stacked high on top of one another, as if Connect 4 blocks. Walking around this memorising landscape “stirs the soul”, as my travel buddy poetically put it, as shrouds of mist smother a patchwork of crops whilst the melodic call for prayer floats out of speakers and echoes around the valley. 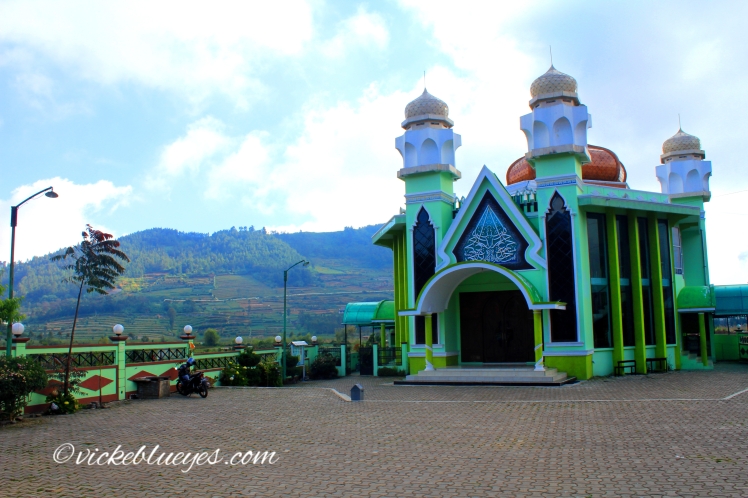 Wandering by foot is a picturesque way to see Dieng Plateau, however some of the sights are far away and are much more easier obtained by renting a motorbike, (some are so spread out, just visiting one might zap out your energy). The roads have often suffered from many a motorbike rider so they are worse for wear, just rubble at some points, which creates a slightly uncomfortable and thrill seeking journey at times. 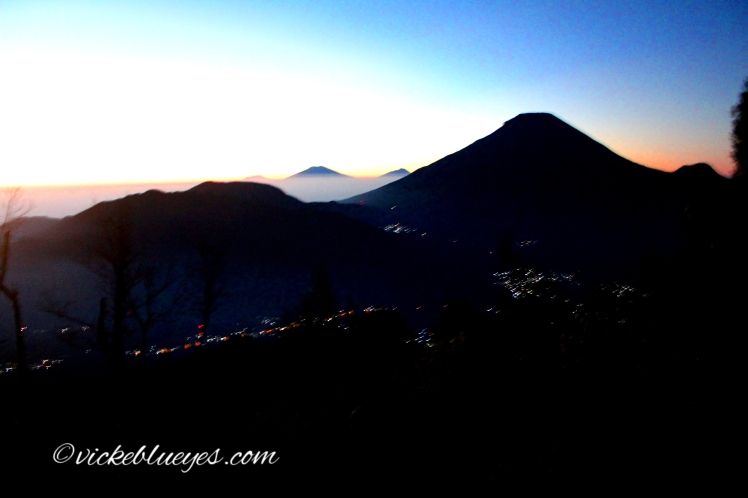 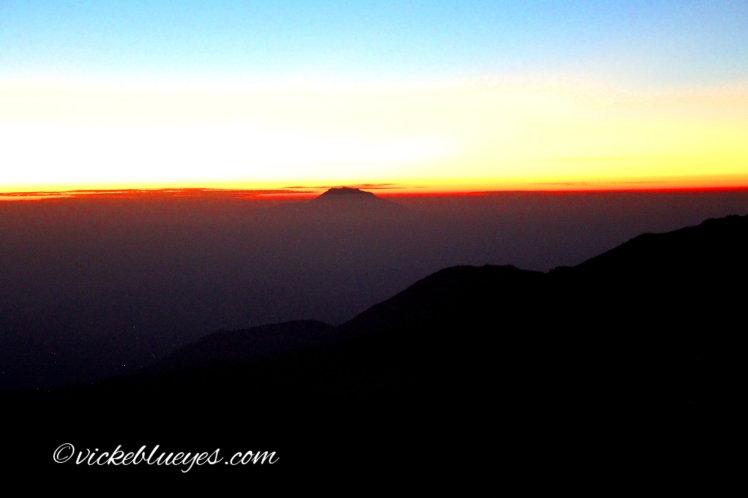 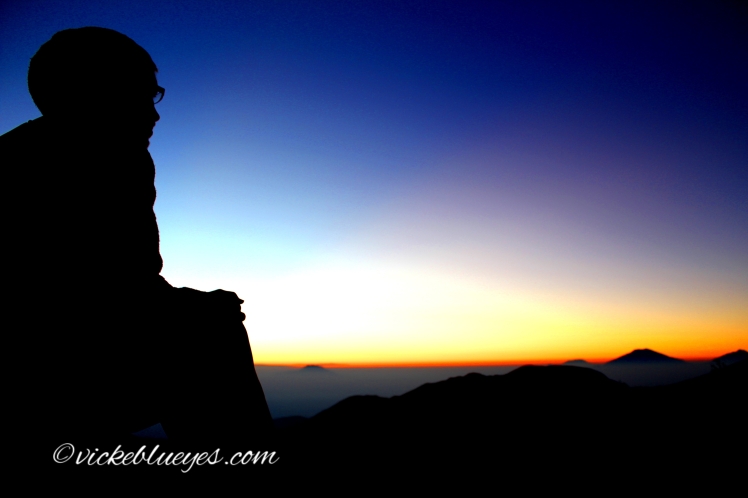 Head to see sunrise at Guning Sikunir, a massive hill next to the village of Sikunir– the highest mountainous village in Java, and it definitely feels like the coldest! Hugging a blanket around my shoulders and looking up at the starlit sky, we ascended the hill. There are two paths to see the sunrise, one to the left which is a easier route to ascend in the dark, whilst to the right, the path is more different, but the views are more spectacular. On one side of the hill is a large glossy lake that centres in a crater with domineering velvet like mountains that surprisingly still sow and crop rice terraces at such a high height. On the other side, the pink sun disperses through a thick smog like mist that encompasses the horizon. The two slowly part ways as if imitating a dance led by lovers. As the sun begins to rise and the mist begins to tumble and fall over the scenery, the rising 7 peaks of magnificent volcanoes loom in the distance. The view is breathtaking and well worth the chilly climb.

The other sights which I recommend seeing in Dieng Plateau are the complex of temples called Candi Gaththaea. Although not the most beautiful temples, seemingly more like ruins, the surrounding landscape around the combination of temples is a striking contrast. Come here early evening and you’ll recognize that here is “the place to be” for young locals, who sit here and gossip and giggle. 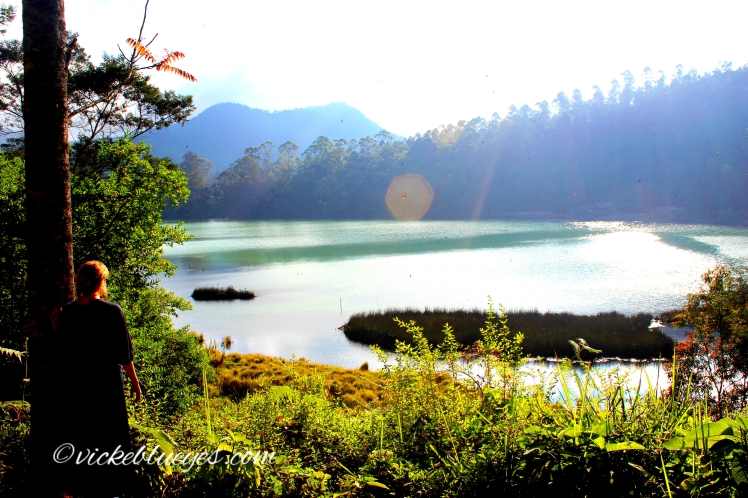 Other places to visit are Telaga Wama and Telaga Penglau– both adjoining lakes that are bright in colour and smelly in nature. Wander around both soaking in the peaceful atmosphere of the meditation garden and the calmness that the lake brings. Another beautiful lake is; Telaga Nila, more of a distance from here but snugly placed through winding roads, over large hills and past the spitting Kowah Caudradi crater. The largest and closet crater- hands down, is Kawah Sileni, a crater that produces so much smoke, one would think someone places a smoke machine into the middle of the crater, because it seems so unnatural. 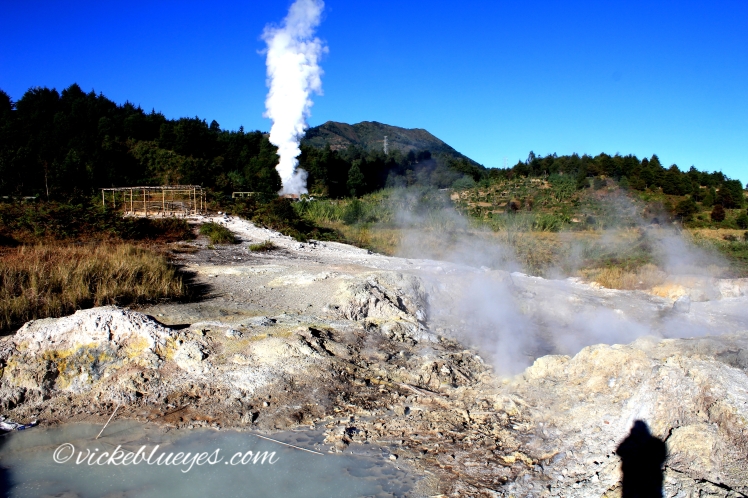 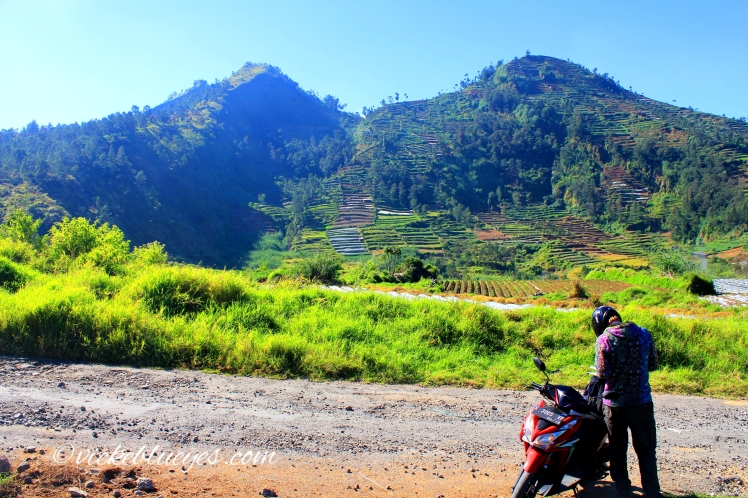 Going in dry season meant the weather was phenomenal, brightening the landscape even further and making our days much more enjoyable. I can imagine that visiting here in wet season, would be an entirely different experience. Although dry season, the weather here was remarkably chilly at night, so I do advise bringing or buying- extra layers with you.

Accommodation options are basic with poorly insulated rooms. We stayed in Dieng Plateau Homestay, where we managed to barter for a superior room for 150 thousand- including your own bathroom, a thick duvet and a TV. However the economy rooms looked very minimal and were a 100 thousand for each one. We dined most of the time at Bojoono’s next door, which had average tasting food- but had heating- a definite bonus! Rooms were also available here and the staff were incredibly helpful with our transportation plans and we also hired a motorbike for 100 thousand for 24 hours from here.

Getting to and from Dieng Plateau is surprisingly complex. Many tours offer a visit to Dieng Plateau from Yogyakarta, however you spend at least 6 hours of the trip in a car, which isn’t fun. I’d recommend staying over night in Dieng Plateau to fully immerse yourself. We caught a minivan from Yogayakarta through Rahyu travel, taking us four hours and 55 thousand rupiah later. This took us to Wonosobo where we then took a local bus to Dieng Plateau for 15 thousand each. Buses run frequently and minivans go every 2 hours, just be organized in your travel plans to fulfil your desires.