Ubud has grown in popularity over the years due to the emotional and personal story told in “Eat, Pray, Love”. Just the title of this novel emphasises the atmosphere of Ubud in 3 forms. Eat: gorge on healthy feel good nutritious food or dine in expensive tourist orientated restaurants. Pray: with your body and soul, mediate and reflect on thoughts and feelings through meditation and healing classes, flex muscles and stiff joints in yoga. And finally, Love: fall in love with the culture you have absent mindedly leapt into, the artisans products and the erratic dance shows of Kecang.

Ubud is a sanctuary of peace and love for the soul and mind. Well, it once was. Areas of Ubud are still reminiscent of this attitude and beliefs, but recluses and practices with extortionate prices combined with the main streets swarming with expensive western shops and food that has been created to satisfy the large amount of tourists, means that Ubud has lost its authentic charm. Gone are the days of seeing local artisans at their work, hammering away at sculptures or wistfully painting in creative expression. Now ludicrously expensive and fashionable shops (Ralph Lauren anyone? No? How about Rip Curl?) line the streets selling items at European prices. The local artisans are pushed to the outskirts of the city, staring blankly into thin air, waiting and wishing for customers to seek them out. The art they now create isn’t of traditional Balinese style, but merely desires to fuel tourists dreams, items to place in lavish estates in the country.

Although the produce that is created in Ubud is not original, there are still areas of Ubud that encapsulate the element and style of Balinese art such as Neka Art Museum. For 50 thousand rupiah step in to this mansion of art, each room solely narrating the gradual process of Balinese art and the depths of its style and how the western world has influenced this style. Not only this, but they have a great exhibition showcasing the work of Artie Smit, a Dutch painter who has been a Prisoner Of War and has lived for many years in Asia. His style of art merges European technique with Asian objective, a beautiful fusion.

Another way to embrace the intrinsic Balinese culture is through watching one of the popular traditional dance shows. There are many types of Balinese dances held at various locations and ranging in different styles from fire and trance to Geckong, which is a traditional form of telling stories or fables of Hindu scriptures. Arrive early at a performance as seats are filled quickly and the best view to be had is closest to the stage. Tickets are 80 thousand rupiah and the show is roughly an hour and a half. The show feels long at times but the glittering gorgeous costumes of the dancers, jerky erratic body movements and large estranged eyes are entertaining enough.

There is little to do in the city of Ubud except get lost in the maze of streets finding beautiful and ornate family temples, watching mothers give blessings chanting and humming, enriching your inner and outer being by partaking in a yoga class, or dining on some delicious and nutritious food. Head away from the jostling tourist based market to outside of Ubud, where quiet vibrant rice terraces join at the hip, all tiered on different levels. Each ridge of rice is sibling to one another, supporting and leaning on one another. The sight is magnificent at Tegalalang, the most popular area of rice terraces. But drive further outside of town to see isolated rice terraces that are equally as beautiful.

Nice rice terraces can be found at the historical sight of Gunung Kawi, ancient temples cut out into the sides of crumbling white rock with an oasis of foliage and greenery centring the tranquil sight. Another destination on any tourists itinerary is Goa Gajah, otherwise known as ‘The Elephant Cave’. The sight is of some historical bathing pools where legend has it, the water restores health and vitality, essentially being the fountain of youth (so of course I washed my face with this water). Near to the pools is the cave where sculptured demons guard the exterior, terrifying any with a weak heart or creative imagination. Descend further past the cave to a quaint Buddhist temple surrounded by ponds with floating lilies balanced serenely on top of the surface. For only 15 thousand rupiah, you are allowed entry into this sight, tying a respectable blue piece of fabric to your side, and for those who aren’t wearing the correct attire, modest sarongs are given out. 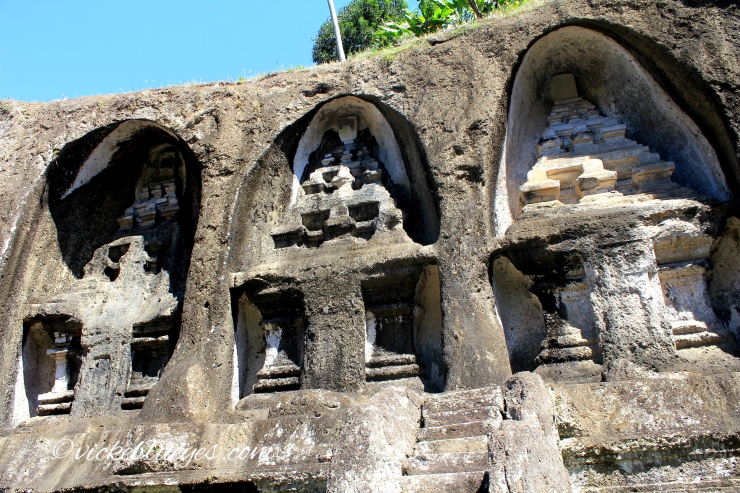 Ubud is in a great location to explore even more of Bali and its number of towering volcanoes, luminous rice terraces and cosy fishing villages. We drove around the village of Danau Batur lake, driving through the crater of Gunung Batur, which loomed menacingly in the distance as we sped past waving locals and garden growing crops, fields of hazy bush and flowering buds in another. The volcano of Gunung Batur is a popular destination for tourists to ascend for a sunrise tour, scrambling and shuffling in the wee hours to catch a glimpse of the inspiring view. An eruption in 2003 means that the surrounding areas of Gunung Batur is covered with blackened rock, broken and rough, deformed pieces of destruction ejected from the powerful volcano that has smothered land, a scene that resembles something similar to Mordor. The trip was stunning, so I do recommend renting a scooter and driving east to Ahmed or north to Lovina, ascending and descending volcanoes as you go.

Be careful though, it would be advisable to drive with an international driers license, as although European drivers license are widely accepted here, further validation is needed. Police will prey on tourists driving long distances for a cheeky pay off or bribe, so a tourist can continue to drive without a license, and so they have a bit of pocket money. Its frustrating that the scooter rentals do not say this when renting out, and the police do not stop tourists in busy areas or areas of rental, which further highlights the corruption. Oh Asia. 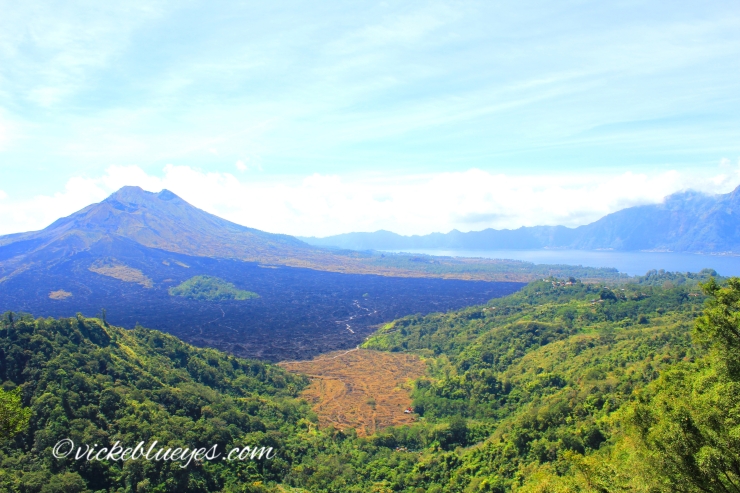 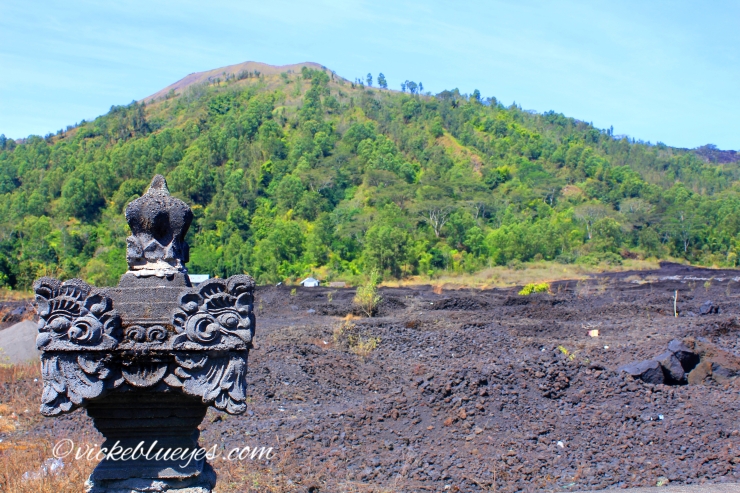 When visiting Ubud, my travel buddy and I found ourselves crossing over with an important local Hindu festival, Galungan. This festival marks the time when deceased relatives return to their old homes in the form as spirits. It was beautiful to see families come together and create “Penjor”‘- bamboo poles with offerings at the end, all in the same design, pieced together carefully and with love. Each family had different offerings and differently designed small offering posts, all brightly colourful personal posts that symbolised the union of the family and their faith. All locals dressed in white, men donning themselves with Indonesian style turbans, all perfectly folded and worn with pride. Women dress as if the belle of the ball, or the bride in a wedding, adorning themselves with jewels on their foreheads and white lace all over their body.

It was beautiful to see the presence of religion so strong in Ubud, a popular tourist destination, and families smiling on the streets, women balancing offerings on their heads whilst popping in and out of temples, and children laughing in excitement for the festival. I do recommend arranging your travels around local festivals, to catch a glimpse of the traditional culture of a certain country, and how it reflects on the people’s way of life. 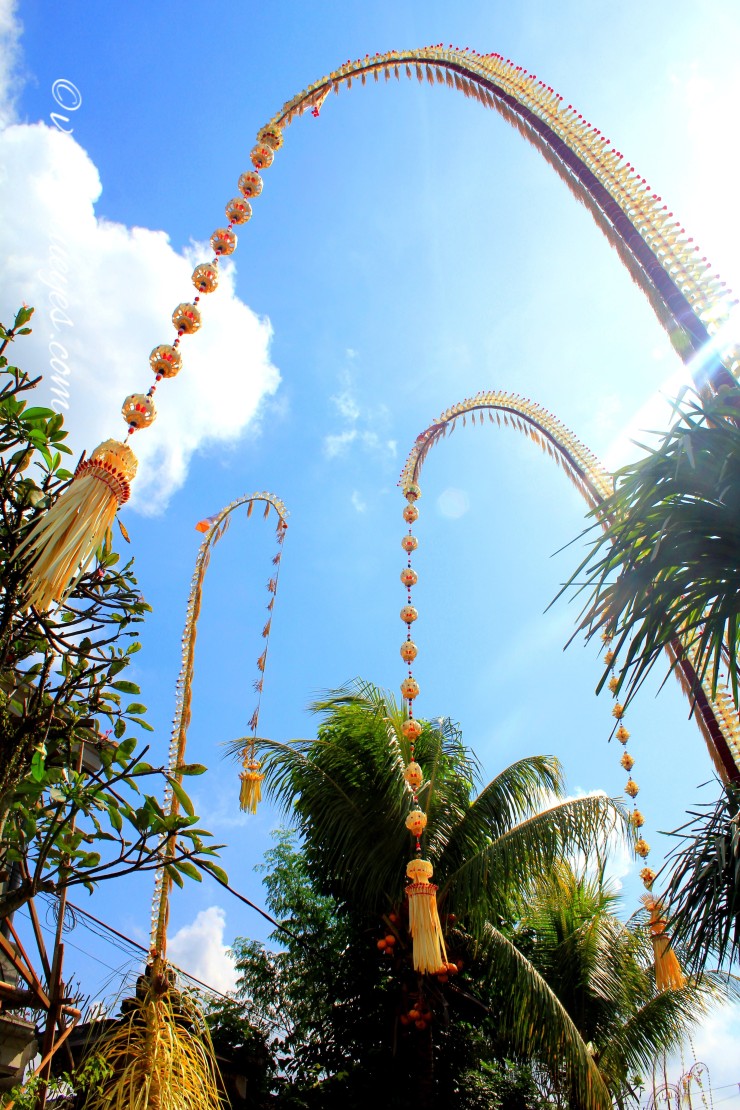 As I said before, dining options are of a vast amount here and are definitely part of the tourist market. Places I recommend were near I stayed, they are; Dayuns Warung, a beautiful vegetarian and vegan restaurant that uniquely creates dishes with flavour and taste, all ingredients tasting great and even better once put together. Gilitari BBQ and steak for its cheap and gorgeously roasted and smoked BBQ chicken and rice. But my favourite by far is: Little India, Sita’s Warung. My travel buddy and I were missing good quality Indian food and craving a good thali, we went there. Each dish took us back to India, rich in flavour and spice, tasting perfect. It was like we had returned to the streets of Delhi, meandering around corners and eating in dirty dives of street corners, given greasy plates and large portions. The food was at the same level of food in India, served in a glittering jewel of a restaurant, delicately furnished in the style of India. Meals here are priced similarly to the main strip of tourist restaurants, although the standard is much higher.

Accommodation varies from hotel suites with perfumed flowers and welcome yoga classes, isolated thatched bungalows with rice terrace views, to affordable home stays built around a family temple. I stayed in Amel Homestay, where the room’s are basic with a fan, but breakfast plentiful and the surroundings pleasurable. A double room here is 150 thousand rupiah.