Dublin is everything you expect and more. Visited by people aiming to find a number of different things: love, a new job, a messy weekend, a cultural insight into Ireland- those that cross paths with Dublin, relish in its whirlwind of a city, which welcomes you with open arms and grinning smiles. The many that visit form friendships, discover new experiences, and showcase searing headaches.

Dublin charms you with its historical grey stone architecture, its witty friendly banter, its cobbled streets, its chic boutiques, its top class restaurants, its crumbling castles that have seen better days, magnificent cathedrals that hum in harmony, and of course its cosy and numerous (1000 to be precise) pubs filled with the elixir of Guinness and Jameson’s. To experience true Dublin, take back alleys into the unknown and meander away from the tourist honey traps, following the footsteps of true Dubliners, which is where you will find the real beauty, history and culture, that runs through the city.

I have visited Dublin quite a few times. On the first account was with my mum (yet another mini break to a location in Europe when at school in Bahrain), the second time was for St. Patrick’s Day and the third time for a friends birthday weekend. Initially my first visit to Dublin was cultural, taking in all the sights and sounds of Ireland for the first time. Since then, my attention has turned to the watering holes that are so abundantly available throughout the city.

St. Patrick’s day in Dublin is an experience in itself, and anyone that celebrates St.Paddy’s day, I implore you to visit this city at this time. Like Hogmany to Edinburgh, rates of rooms, food and booze rocket sky high as the entire city expands in size, volume and green costumes. Luckily, staying with a friend’s mother who lives in the Enniskerry Village in Wicklow, (the outskirts of Dublin if you are not quite sure what I mean) meant that we were able to enjoy the debauchery and riotous affair of the city, as well as rest in a peaceful and tranquil area. Even taking a stroll around the grassy rolling hills, (which stretch out as far as the eye can see) that surrounds the quiet sleepy village- which looks to newcomers in bewilderment, is pleasant. You can quickly notice why one refers to this area as “the garden of Ireland“,  as it avoids the Dublin sprawl and passing tractors are common. 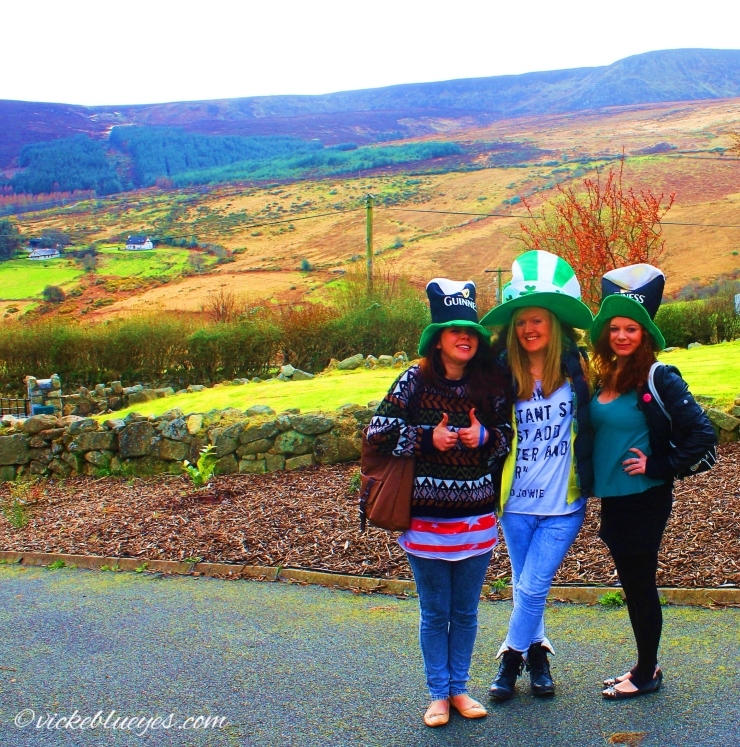 The festivities for St.Paddy’s day commence with reckless abandon as soon as the sun begins to rise over the granite city. Tourists encircle many of Temple Bar’s pubs and bars, downing pints and mixers haphazardly whilst making new friends in their merriment, even dancing shirtless in the street donning personal flags around their necks patriotically. Keen locals drink in authentic old fashioned pubs that are filled with fiddlers and jiggers, whilst young local teenagers cause havoc outside McDonalds on Grafton Street. We passed an elderly couple standing amidst it all holding two signs stating: “Where is Jesus?” An obvious example of the Catholic roots that Dublin has built its foundations on, and in reference to its new type of following: booze. We saved ourselves for nightfall, which many of the Dubliners had done as well, casually drinking until dark, where clubs were open for hours on end.

Although a fun and interesting time to visit, if you want to experience a little more than empty shot glasses and tourists struggling to tie their shoelaces, visit another time, when crowds are less busy and the price is less steep. Dublin is filled with stunning history, like the Dublin Castle which is now used by the Irish government, the Chester Beatty Library which is situated on the Dublin Castle grounds, or Christchurch Cathedral which has a wonderful location over the cityscape of Dublin. Dublinia and the Viking World is an excellent attraction to learn more about the Viking World which once occupied Dublin- it is great for children (and something I really enjoyed).

Trinity College, the university famed for its academic excellence, has a library room, home to some of the oldest volumes which have played an important role in the creation of Dublin to what it is today. It is a wonderful retreat away from the bustle of the city and the tranquil space and enriching history calms the mind. Another similar spot is Stephens Green, the main breathing space for Dublin which was once filled for public whippings, is now brimming with young friends picnicking and playing a game of football. Merrion Square is similar, however rather being important in history, Merrion Square is culturally significant because of the large statue of Oscar Wilde in the grounds, reminding all those that come here of his intellect and intelligence.

Fantastic art galleries to visit are The Green On Red Gallery, which represents a number of contemporary work, and the Irish Museum of Modern Art which blends old and new works well and features pieces from well known artists such as Pablo Picasso and Joan Miro. My personal favourite sights to see are; The Little Museum of Dublin, as this non for profit establishment documents the social, cultural, and political history of Dublin city donated by Dubliners themselves-adding a personal touch to the artefacts, and of course, the Guinness Factory. Although not personally a fan of Guinness, the storehouse cum brewery provides an interesting scope into the process of Guinness, and reaching the top floor where the Gravity Bar is, you are offered panoramic views over Dublin.

Another fantastic way to immerse yourself within the culture of Dublin is following one of its much loved sports: Hurling, Gaelic Football or Rugby. On my third visit to Dublin, our weekend of mad dancing and drinking crossed paths with the 6 nations, which we watched anxiously in a pub (of course rooting for Ireland- you would be mad if you weren’t supporting them in their home town). An entertaining afternoon.

Dublin is a shopper’s paradise, and unlike other small towns in Ireland, it might even turn into a revolving door nightmare. Temple bar is filled with quirky boutiques that ooze vintage and unique character but Grafton Street and its large chain stores dominate the centre of town, similar to the fashion style of the people, of glam over edgy.

These same areas are also the epicentre of Dublin’s main priority and biggest tourist attraction: drinking. Although Temple Bar can be very expensive due to it being a honey trap for tourists, so expect inflated prices for drinks and chains of clubs with generic pop music- which you are led to by a bored promo person.  To avoid these places wander down streets that are nearby and find hidden gems that are more original and half the price. Favourites are The Brazen Head pub; the oldest pub in Dublin, Peader Kearneys/O’Donoghue’s/Mulligans/O’ Shea’s/O’Neils, the chains that are around the world but are created right here in Dublin, The Dice Bar for its varied music taste, Odeon Bar for its art deco elegance, Workman’s Club filled with live music, Vintage Cocktail Club for its… you guessed it.. cocktails in a vintage club setting, Bernard Shaw – the coolest bar in town, and The Globe, delightfully trendy. The list goes on and during my wild nights spent in Dublin, unfortunately only certain names have etched into my memory. Sign of a good time right?

Just like the flurry of bars and clubs in Dublin, restaurants and coffee shops are a plenty. Bewley’s on Grafton Street is famous for being the “it” coffee shop, Cafe Fresh offers healthy organic meals, Epicurean Food Hall has a diverse range of cuisines, whilst Locks Brasserie is a posh swanky restaurant to eat Instagramable food in. La Mere Zou is another restaurant to impress whoever you take with you, whilst Whitefriar Grill combines traditional taste buds with an elegant setting. Other similar style restaurants are Chapter One; Lennox Cafe Bistro, Chez Max, Peploe’s and Hugo’s, (all places to find a superb bottle of Chablis). On my recent visits, I found myself eating at whatever pub we were drinking in and typically ordering a pie to sample the traditional cuisine (when your pie is puff pastry and you can take it off the meat part all in one, you know you are in a classy establishment).

In all honesty, Dublin is a wonderful city to visit whatever your interests, but make sure you explore the city off the tourist trail, losing yourself within the city and loving doing so.