Picture a city that resonates on the sound of live music echoing through the town, the sweet sounds of saxophones and the smooth sounds of soulful tones, colourful historical influences that haunt every street corner and an upbeat welcoming atmosphere, then you have New Orleans. 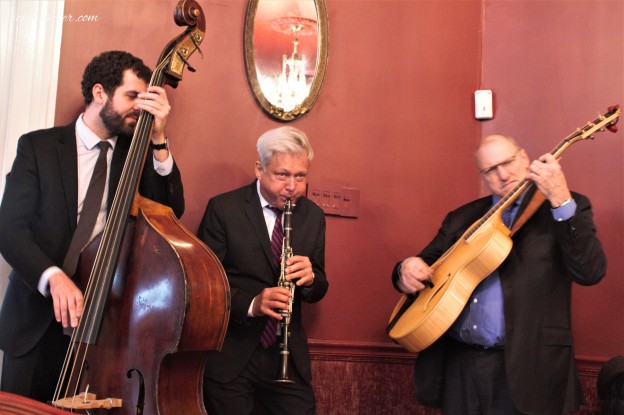 Seeped with French influences, this city has been fought over for years on who owned this hip swaying, hand clapping, foot stamping city, and it’s really no surprise when you visit and wander around the historical French Quarter. Bright and beautiful buildings house unique art galleries and tacky voodoo shops, you can spot the colonial architecture; the iron clad railings, the shape of the buildings, or the stone paved street names, each hinting at a past that been continued to be brought to life through the eclectic flavours of Creole food, the vibrant festivities of Mardi Gras, and of course, the bands that perform nightly to a heaving mass of enthused and inebriated bodies. 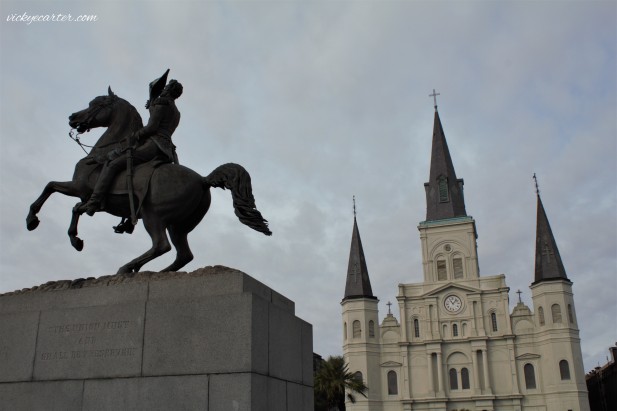 Going for a mindless wander around French Quarter is a must when visiting New Orleans, to soak up the revelling history and magical atmosphere. Big brass bands perform in the street, much to the amusement of tourists, and restaurants and bars are in abundance here. Jackson Square is a useful focal point, bordering the river and French Quarter. Admire the artist’s paintings that hang proudly on the railings and hitch a ride with a horse and cart or pedicab here, for a more informed tour of the place. 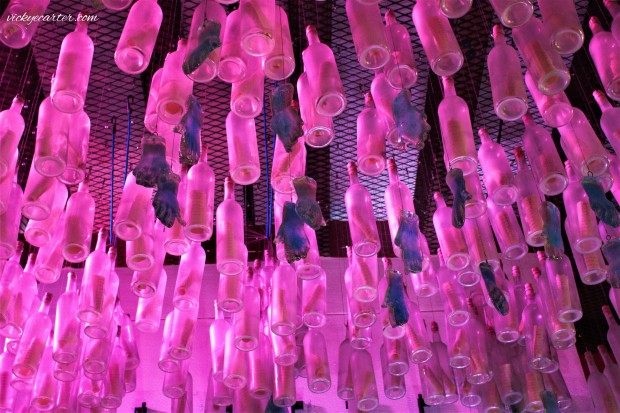 Two museums which I really enjoyed was the Cabildo and the Presbytere; both offer a discounted deal when buying one ticket, you receive a cheaper entrance fee to the other. The Cabildo was fascinating as it offered a perspective into the Slave Trade and the Civil War. Shocking facts are merged with portraits of families and materials from the time, highlighting the harsh realities for many African Americans. Napoleon’s famous death mask is stored here as well, which you were able to try on previously, however times have changed. 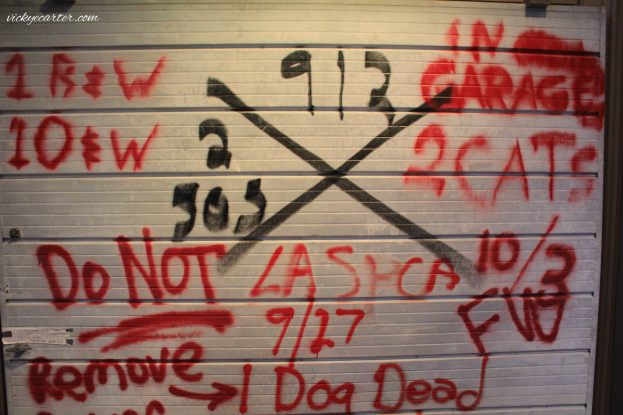 The Presbytere offers exhibits on the traditional festivities of Mardi Gras, showcasing original designs of costumes as well as props from the past few years. The exhibit gives a real insight into just how long Mardi Gras has been running for and what it means to the people of New Orleans, evoking a community spirit and bringing a sense of unity between all people of New Orleans, and celebrating life and colour too. Another exhibit in the museum is devoted to Hurricane Katrina and the devastating effects it had on not only the infrastructure and land, but the local people too. The exhibit is filled with haunting memoirs, videos and photography, highlighting the magnitude of the destruction and the inadequate response of the emergency services to such a large scale disaster. It gave me chills, wandering around and seeing a destroyed violin, the shacks of houses that remained after the hurricane- mainly just wood and bricks, a mess on the floor. But what I also recognised, was the strong resolution and determination that the local people had, in not only helping each other during the disaster, but afterwards as well, supporting one another- physically, mentally and emotionally. Once again, reinforcing the community spirit and being able to see the destruction and devastation in a new light, which highlights even further, the real admirable strength of the people of New Orleans. 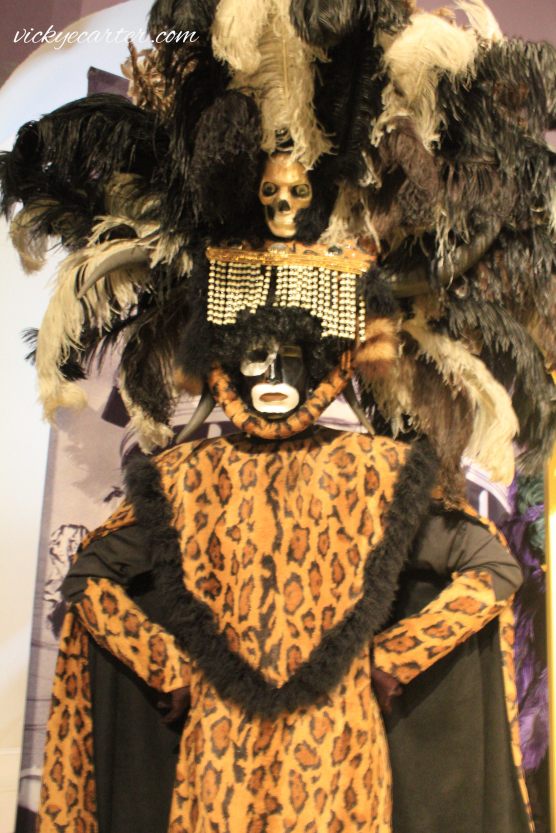 Heading away from town, a popular tourist attraction is to take a traditional steamboat and float along the Missippi River. The boat is the main interest, as there is little to see on the river itself. I do think an evening cruise with a band might be a more enjoyable experience, as taking a two hour boat trip during the day just to purposefully sail on the boat, wasn’t as a unique experience as one might think. 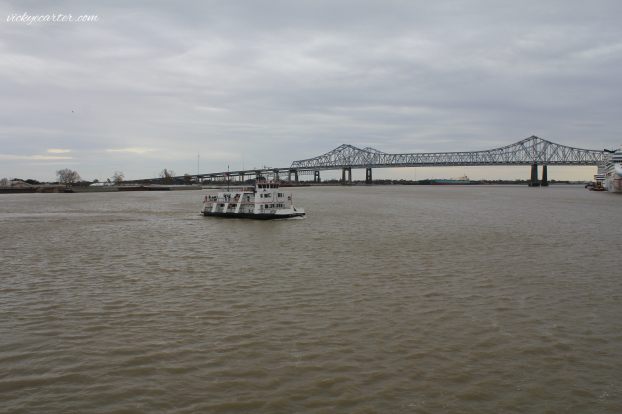 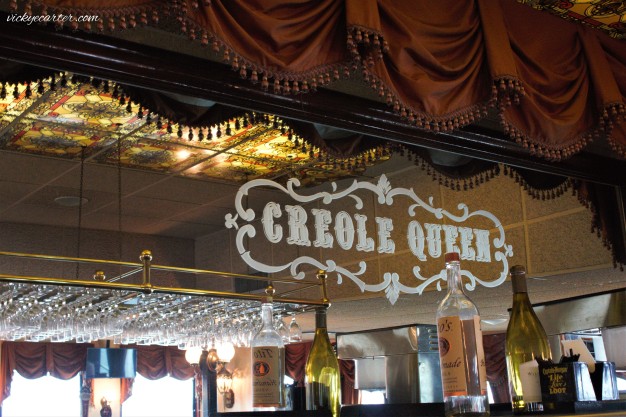 Another similar experience is a swamp visit looking for alligators. We booked our trip with Cajun Encounters, the largest swamp tour operator, and although the river lacked in alligators, the tour guide made up for it with his detailed information and humorous perspective on life. Although we only saw half the head of an alligator dozing on a branch submerged in the river, we did see lots of birds of prey, raccoons and river snails, as well as some stunning natural landscapes of swamps and life by the river. 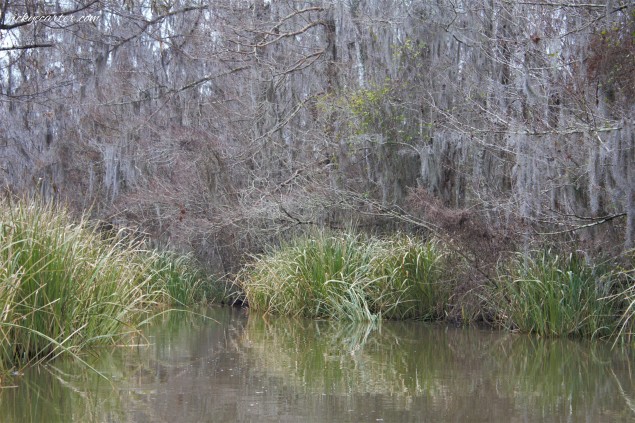 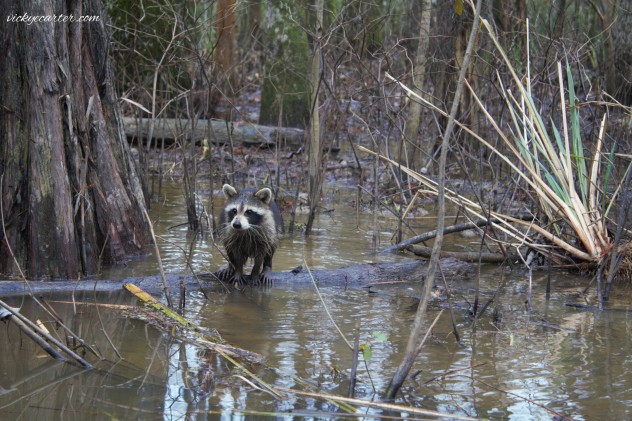 The other tours promoted throughout New Orleans is the plantation tour, where you explore a traditional Southern plantation or a voodoo tour, where you are taken to popular (or supposed) haunts of the French Quarter and nearby cemeteries, and are told the tales of the practised religion; voodoo. Unfortunately, it is unlikely you will come across a real practising Voodoo priest, rather the religion has been turned into a tourist attraction; with voodoo shops in abundance advertising “legitimate readings” and curses for your enemies. Although interesting to learn about, don’t be swayed into believing all is fact. 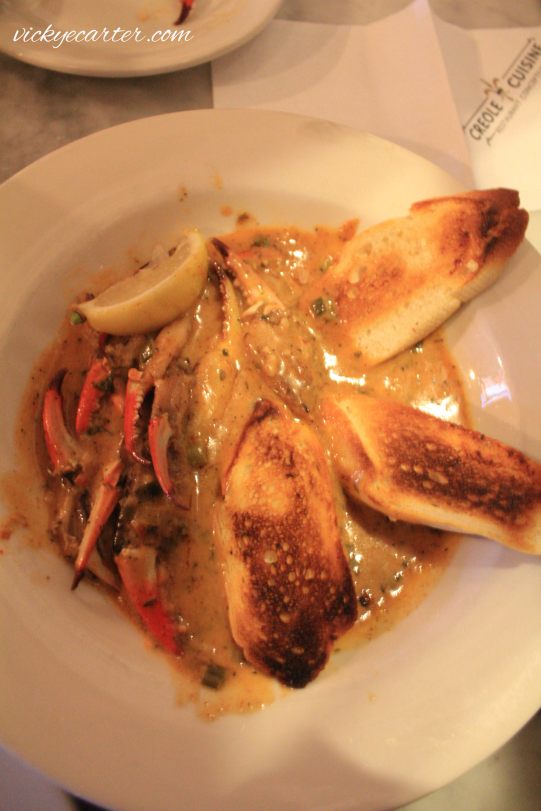 One of the best ways to full appreciate the New Orleans culture, is by getting immersed into its many restaurants. In the French Quarter, food is largely French Creole and varies from mid range to opulent styles. Try a steaming hot broth of gumbo, rich in flavour and with rice in the middle centring the broth, its a filling dish. Alligator is surprisingly delicious too, savour the local crayfish and a traditional Jambalaya packed full with herbs, spices, and a variety of meats that adds different layers to the dish. We ate at Muriels in Jackson Sqaure, a place with wonderful Jazz on Sunday, Royal House, where the crab claws in a rich garlic sauce are heavenly, Rockafeller Oysters at Antonine’s Restaurant– where the dish and restaurant has been passed down from generation to generation, and where I tried to eat a whole crab deep fried, (yep literally everything, shell included), fried chicken at the classy but cold establishment of NOLA’s, succulent alligator at The Count Of Two Sisters and the mixed Jambalaya at Mr.B’s Bistro. 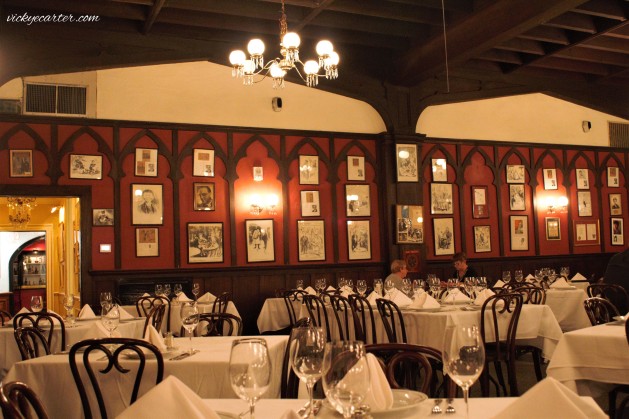 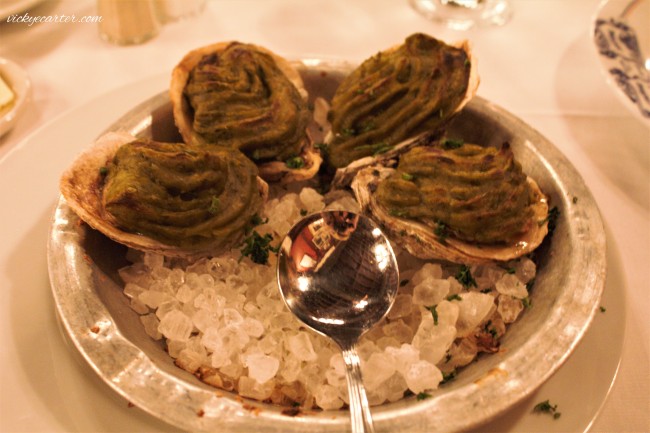 After overeating and gorging yourself on fried or traditionally filling dishes, appreciating live music is next on your agenda. New Orleans is a non-stop party place, really only on a Monday does some local places close, but very rarely. Weekends, the city is filled to the brim with both national and international tourists, and during the week… it doesn’t stop. Speaking to a local pedicab driver, we were told that we were only visiting in the quiet shoulder season. I couldn’t fathom what it would be like in Mardi Gras, with the city having 5 times as many people; the streets literally flooding with visitors and bars heaving with bodies. 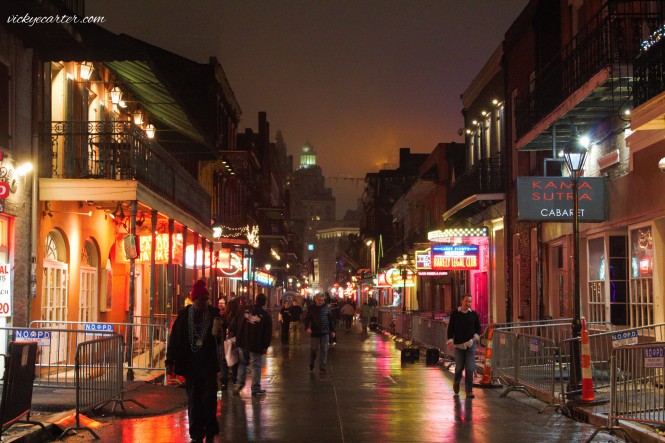 Bourbon Street, and all the bars on the street, are mainly created for the sole purpose of the tourists that come here, in their thousands. With drinks such as “Hand Grenade” and “Hurricane”, you can listen to any band and they will most certainly, deliver a decent cover. We found ourselves one night in Fat Catz, listening to a band that played everything from Chic to Black Eyed Peas to please the crowd. Although a fun night, if you really want to appreciate the true culture of New Orleans and experience a new band at the same time, head to Frenchman Street. 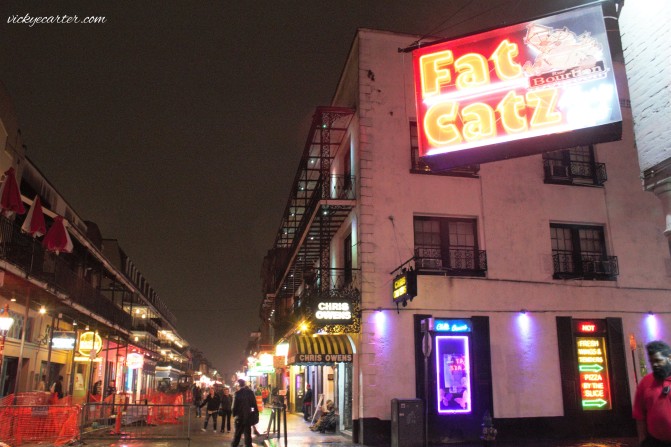 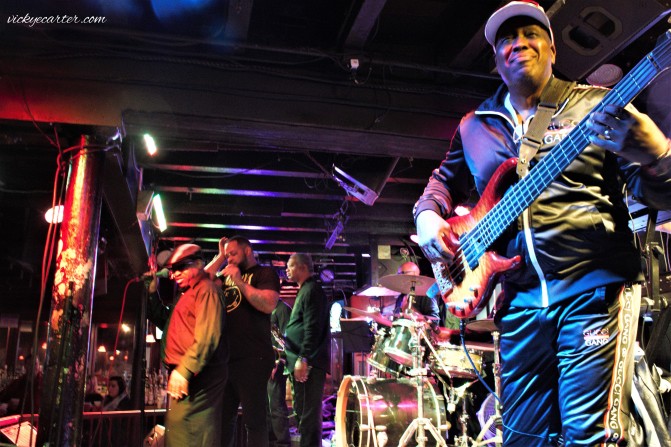 Going on the weekend to Frenchman Street will mean it is a lot busier with a much wider variety of bands performing, however going in the week, certain venues are still populated with enthused fans of bands, friendly locals and eager tourists. On the Sunday night, we saw some jazz artists at Bambala, but spent most of our night listening to a sassy soul artist singing with a brass band in Cafe Negril. 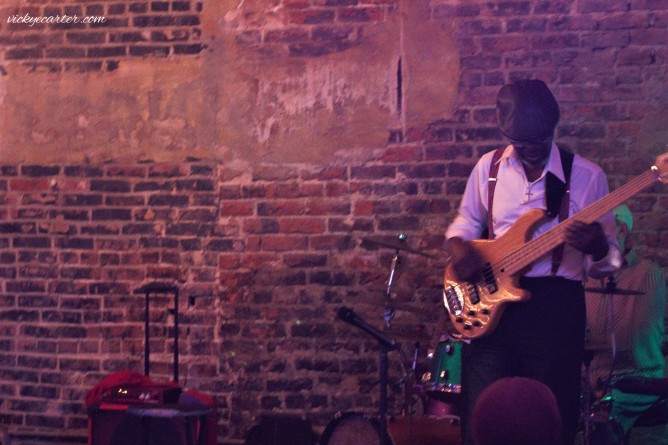 American football is a huge aspect of the culture and so if you are planning to head out on a Sunday, keep in mind a weekly football match will occur at 3pm, with countless TV screens in restaurants and bars dedicated to the sport. When we first hit Frenchman Street, community morale was high as “The Saints”, (the New Orleans football team) had just won and were now heading into the next stage of the football competition. For The Saints, and the people of New Orleans, the super bowl hosts more significance than meets the eye, it is more than just a football stadium, but once acted as a sanctuary for the victims of Hurricane Katrina. Thus each try was sacred, and match won holds a poignant value, highlighting a success story for a once broken community. Going out on a Sunday after The Saints had won, Frenchman Street was filled with friendly, and very complimentary might I add, fans. 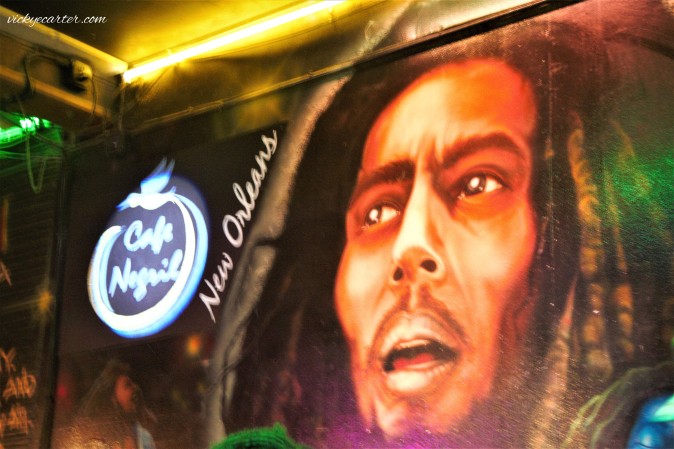 We also experienced Frenchman Street on a Tuesday night; starting off our night at The Spotted Cat, listening to some funky jazz, heading to Cafe Negril for some blues and ending up in The Blue Moon listening to an incredible funk band called Waterseed. I immediately fell in love with the sound of the band; their vocals, and unique style as individuals and as a collective. They were able to create an incredible rapport and collaboration with the audience, and their stylised dance moves really were the cherry on top. After they finished their set, we finished our night in Maison, listening to a live band that created a mish mash of hip hop, and RnB- a powerful and energetic performance.

Being an avid fan of live music (and food), I personally loved New Orleans and would implore anyone to go, just maybe not in Mardi Gras. 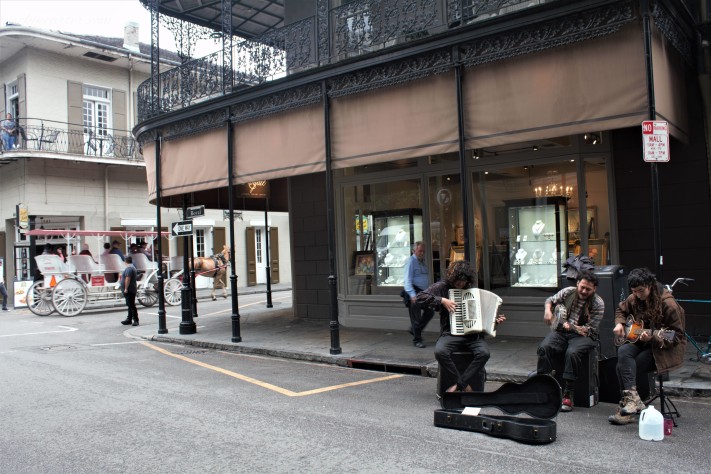 2 thoughts on “The Sound of the Saints in New Orleans”