Another city I quickly fell in love in with was Stockholm. What is it with these Scandinavian countries that have the perfect balance of vast nature, stunning architecture, unique neighbourhoods and delicious food in their welcoming cities? They seem to capture the equilibrium of everyone’s needs so accurately, I’m surprised that not more people have flocked in their droves to move here. I most certainly would. Maybe it’s the language barrier of Swedish, or Danish or Norwegian? With the sheer amount of gorgeous people wandering around the city, I wouldn’t feel embarrassed to practise my language skills with any of them. Although each Swedish person we met spoke incredible English, which makes me feel slightly embarrassed at my lack of ability to speak Swedish.

As you head into the city, you pass neutral shades painted on walls, tidy parks with sweeping pavements, and classicism architecture neighbouring modern department stores, all with neat elegant décor. The fact that Stockholm is split up into 14 islands, creates a spacious feel of smaller communities and individual neighbourhoods separated by Stockholms strom which flows through the city, into Lake Malaren and out into the Baltic sea. The city is literally immersed into the surrounding water. Islands and neighbourhoods are merged together by fifty bridges, uniting quirky with touristic, historic with modern. As each neighbourhood is interlinked by tram, bus, boat or even taxi, the size of the city envelops the land creating enough of a city to explore and not awkwardly bump into an ex, but also is small enough to dedicate your time and interest in one particular neighbourhood. 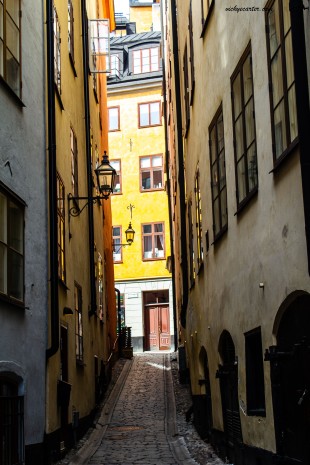 Gamla Stan, otherwise known as Old Town, is where we stayed and where the infamous Stortgort square is. Meandering through back streets where Swedish flags blow in the wind and hanging plant baskets dance to a silent beat, you wander past coffee shops advertising “fika”, the traditional Swedish way of having a break over a coffee and cinnamon bun, intimate jewellery shops and second hand stores filled with customers collecting a bargain. 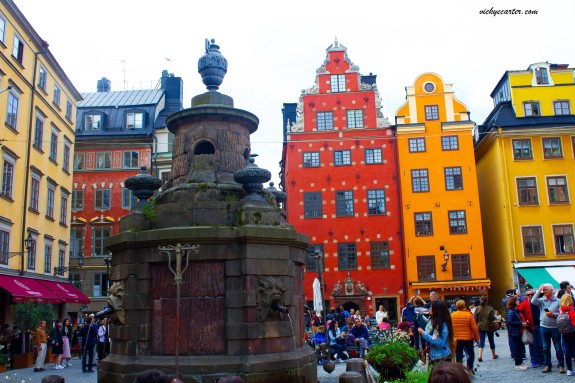 Following the grey cobblestones and nodding to the occasional heroic statue, you will find yourself gravitating to Stortgort square, where many of the tour groups congregate. A cosy square with brightly coloured buildings line the narrow streets and a historic ornate fountain centres the square, gurgling out water. The Nobel Museum stands proud whilst the Royal Palace is just around the corner from here. Choose to break, or should I say “fika” and watch the world go by (literally the world as so many tourists pass into the square) or head over to the Royal Palace to be rewarded with panoramic views of the floating boats that glide seamlessly along the smooth river, ducking under grey arched bridges. 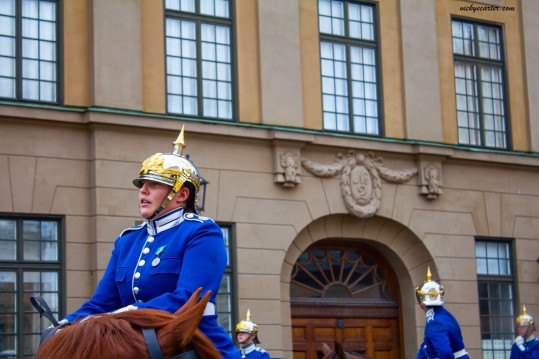 We headed to the Museet Moderna, the Modern Art museum, which was an interesting experience. I say interesting as some of the pieces in the museum really were… interesting. Artwork by infamous artists like Picasso and Matisse hung next to intimate photographs of strangers and animations of cartoons merged with documentary film. The part of the exhibit that really interested me was the Swedish architecture section that highlighted architecture through the ages. It painted this historical journey of roman influences on architecture and how it transcended to modern designs and styles across Sweden, followed with model buildings and sketching. Head to the basement to step into the cinema section of the museum, where experimental films probe your intellect and cause you to ask questions about your self and the world. I watched a fascinating film highlighting the work that guerrilla girls do, a band of passionate feminist activists who travel around the world showcasing the gender and racial inequalities in the art world through performance art, protests, word of mouth and literally plastering posters for all the world to see. Donning face masks of gorillas, they become anonymous voices but solidifying into a global movement of change, it was empowering and inspiring.

City hall is a must when visiting too, the towering spire looms over Stockholm in the distance, the gold bell still in splendour and the thousands of bricks that create this fortitude of power all stand proudly. Wander around the courtyard, taking in the ivy that smothers the walls, the line of arches that home sandy sculptures and head to the waterfront to take in the breath-taking views of Gamla Stan’s neat buildings and winding spires of churches in the distance. Unfortunately, you can only wander through the city hall with a guide after buying a ticket as it is still a parliamentary building. Each tour is every half an hour and takes 45 minutes, so if you just miss one or on a tight schedule, you won’t be able to explore the inner depths of the city hall. A walk around the grounds is still wonderful enough. 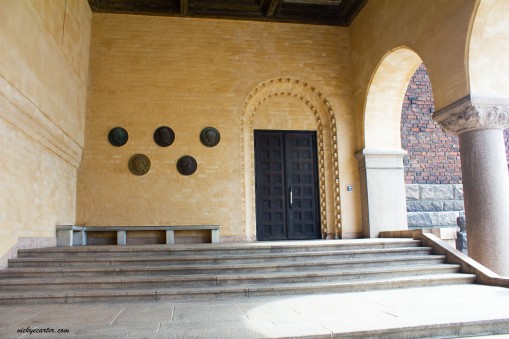 One way to see the sights are on the back of a hop on hop off sightseeing bus, but as we noticed quickly, the top of the bus was contained with glass windows, which although protecting from the wind, aren’t well suited for taking holiday snaps. The bus can take you through various neighbourhoods and to the most popular attractions in Stockholm, but we decided to see the sights by boat. There are a number of options when travelling by water (even local ferries if you want to pay a fraction of the price and be savvy with your money) but the hop on hop off ferry is a 1 hour trip, floating past archetypal realms of Swedish architecture, theme parks filled with terrifying rides that dip and dive, and grand restaurants lining bold multi coloured streets. It was the right decision as we soared over the water, the wind in our hair and the sun on our face. It allowed us unparalleled views of the city. If that isn’t for you, trams, trains and buses are a plenty, joining various islands to mainland Stockholm.

Although many visitors tend to take in the sights by foot, as the miraculous bridges, as well as the proximity of sights to each another, make this choice an easy one. Locals prefer to get around by bicycle, or by motorised scooter, which is as dangerous and thrilling as it sounds. Scooters are easy to rent and leave wherever you like, you may see dozens abandoned on the roadside where riders have decided to travel further on foot. A fantastic idea to explore a city in a quick and lazy manner or even cut across to another part of the city with no petrol or parking fees, both cost efficient and environmentally friendly. In terms of accessibility when travelling around Stockholm, areas of Stockholm are more disabled friendly than others. Most key sights in the city are fitted with a slope of some kind for wheelchair users and steps always have a rail or banister to help assist but many pavements are uneven, have ill fitting slabs in place or have cobblestones in various designs, which can cause those who have problems walking, some difficulty.

Sweden has a world wide reputation for three things; gorgeous people (which were aplenty in Stockholm), stylish architecture and geometrical design (which was noticed in not only the attractions but the shops that lined the streets), as well as fine dining that would enhance anyone’s Instagram account, welcome #foodporn. Stockholm didn’t fail to disappoint on all these accounts, most noticeably the food. As I was only here for a brief period, we dived into the Swedish palette with rigour. Heading to the Strandvagen area for a spot of lunch, we found ourselves in a pleasant tea room in a department store, (you can take the girls out of London but you can’t take the London out of the girls) nestled beside gorgeous patterned wall paper with plush colours and brightly designed sofas, minimalism collided with colour. Choosing prawn skaagan and Japanese green tea, steaming in a frothy bowl, we took in the sights of surrounding diners enjoying scones and Swedish style finger sandwiches. We determined to be more authentic with our next meal and we headed to Stockholm Fiskt, which is in the hotel of Raddisan Royal Viking Blue. Don’t let the idea of a hotel restaurant put you off as the starter of herring and their main course of Swedish meatballs are divine, (when in Rome right?). For a more traditional seafood experience, head over to Rakan restaurant, where a pond filled with bored koi centres the restaurant and wooden boats that are remote controlled by staff send starters to your table. Sea voyage props adorn the walls and fresh seafood can be ordered with an array of sides to choose from. I tried the herring platter which was… brave, might I add. Herring for a starter or even in a sandwich I think is achievable, even dare I say it, enjoyed, but a whole platter of herring in different styles? It can be a little sickly. Even served in the traditional manner with plain boiled potatoes, cheese and bread, to create more of a bland aftertaste between bites doesn’t necessarily do the trick. Luckily, the chocolate fondant for dessert quickly made me forget all about it. 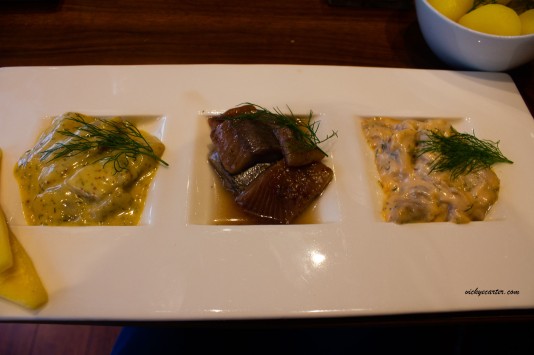 Another unique dining experience is “Mamma Mia The Party” which for any ABBA lovers should be on the top of your list. Whisked away into the traditional setting of the Greek restaurant imitated in the movie, you receive a four-course meal with a Swedish development of the plot line from the Mamma Mia movie with well-trained actors, loud costumes and superb acting. A night to remember or looking around at the alcohol intake of some of the other people who were there, not to remember.

Stockholm is a beautiful city, as beautiful as the people that live there, and I can see why a number of people I know have recently moved to Sweden. Although an expensive city to visit, Scandinavia is known for its hefty price tag but a healthy way of living. The question is, what would you sacrifice? I’ll see you in a bar in Stockholm. I’ll be the one with the small plate of herring.